"They call us the dirty Afghans"

Men, women and children run to the border post with a few belongings to be registered there. Thousands of Afghan refugees have to leave the neighboring countries of Pakistan and Iran. 2000 returnees were currently registered on the border with Iran, every day. Many of them lived in Iran for decades. The majority of the returning refugees were deported.

Salman was also expelled from Iran, along with a group of other Afghans. To earn money for his family, he went to Iran two weeks ago and worked there as a day laborer in a factory. "The police came one day. They beat me out of the factory and deported me in my work clothes. There was no food or drink in the detention center," he told Deutsche Welle. Many Afghans in Iran are discriminated against. "They call us 'dirty Afghans'. Even for those who are legally in Iran, the Iranian security forces tear up the papers and say, 'You filthy Afghan, why did you come here?'" 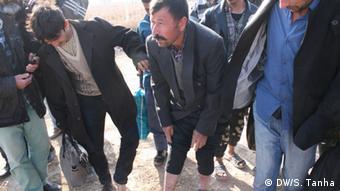 Returnees show their scars from torture by Iranian security forces

Matin Qaderi, head of the office for refugee issues at the Islam Qala border post in Herat, experiences this again and again. "If you sue for wages in court, you will be deported straight away," Qaderi told DW. However, success views are practically zero.

According to the International Organization for Migration (IOM), which is under the umbrella of the United Nations and has 162 member states, around 560,000 Afghans will be returning from neighboring Iran and Pakistan by the end of 2017.

For comparison: According to the federal government, 245 Afghans were deported from Germany by air in the first half of 2017, in 2016 there were around 320. The next collective deportation from Germany to Kabul is to take place on Wednesday, this time with 50 Afghans. According to the International Migration Organization (IOM), 3,938 Afghans have voluntarily returned across Europe since the beginning of the year. 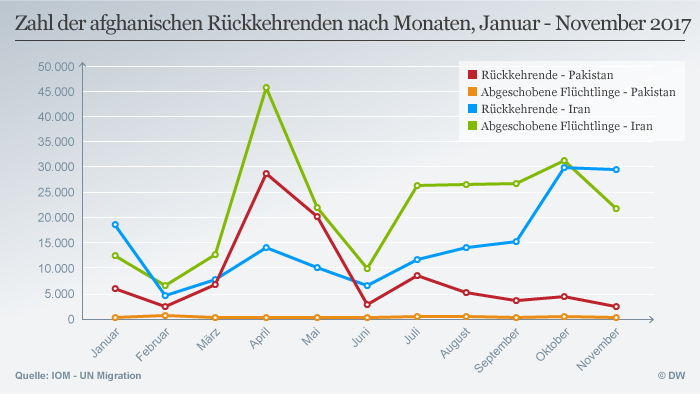 The need for humanitarian aid is increasing

Many of the returnees are left with nothing. Omar Majeedi, who supports Undocumented Afghans from Iran and Pakistan on behalf of the IOM, states: "The returnees from Pakistan and Iran are confronted with the same problems in Afghanistan that they had fled because of: growing insecurity across the country and a lack of security Jobs. "

A committee of the Afghan government (DiREC, Displacement and Return Executive Committee), together with representatives of international organizations and donors, has been taking care of the admission of returnees since 2016. Organizations such as IOM, UN refugee agency UNHCR, Help Germany and War Child are just some of the many that returnees depend on.

Still, the help is not enough. According to a UN report, around 3.3 million people in Afghanistan will be dependent on humanitarian aid in 2018.

In a T-shirt when the temperature is below zero 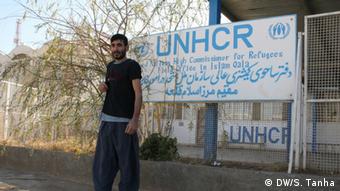 Ahmad in front of the UNHCR office in Islam Qala

Ahmad (name changed), who stands in a T-shirt outside the UNHCR office in the Afghan city of Islam Qala near the Iranian border when it is below freezing, is one of them. He told DW that he wasn't even allowed to get his clothes and shoes or money when he was picked up and taken into custody. "I was in detention for twelve days, where I was forced to work to pay for my departure," he says. "I finally sold my cell phone, then they let me out. Now I'm here on the border and don't even have the money to get to my home province."