Is the US better than Mexico?

Migrants in Mexico - discriminated against and ostracized

The video, which has been circulating on social networks in Mexico since Sunday afternoon, lasts less than a minute. It shows the 9276 police car from the Mexican resort of Tulum and four officers detaining a woman. The woman groans but does not offer any resistance. Yet an officer kneels on her back. A few seconds later the woman lies limp on the floor - presumably suffocated.

Shortly thereafter, details emerge: The victim's name was Victoria Salazar Arraiza, was 36 and came from El Salvador. She was the mother of two underage daughters and was granted temporary residence in Mexico for humanitarian reasons. According to the police, she had previously insulted passers-by and shop employees.

In comments on social media, many compare the police violence to the murder of George Floyd in the United States. The behavior of the police is not an exception, but reflects the deep-seated problems in the authorities and immigration policy, representatives of human rights organizations told DW.

Discrimination and a lack of education

"We are seeing an increase in these cases of abuse," Laura Díaz de León, director of the Institute for Security and Democracy (Insyde), told DW. "There two points come together: one is the discrimination and violence against migrants and the other is the lack of training of the police and the staff of the National Migration Agency (INM)." 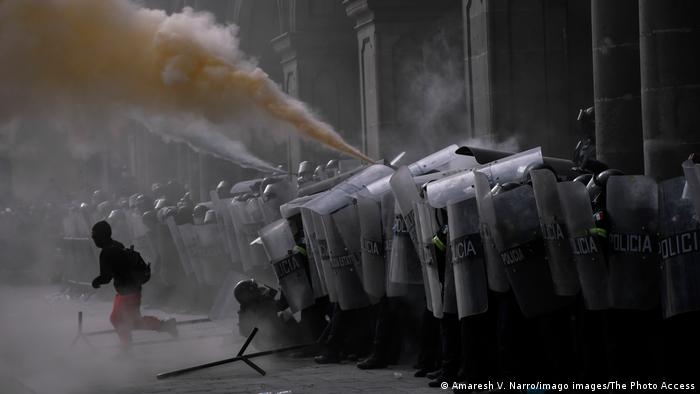 Not squeamish - Mexico's police at a demonstration against violence against women

Security officials in Mexico generally did not obey the rules governing the use of force during arrests or behavior during demonstrations. "We also saw it in November 2020. Instead of accompanying a march against femicides, the police in Cancún shot in the air and molested the women," says Díaz de León.

In the case of the killed Victoria Salazar Arraiza, neither the local nor the federal police units were authorized to take the migrant into custody. That is only up to the Federal Police and the National Guard.

Punishment only after "major media events"

Following an official protest by the El Salvador government, Mexico has now condemned the crime. In his early conference, Mexican President Andrés Manuel López Obrador said he felt "shame" for what had happened and promised that "there will be no impunity".

The police officers have been released and are under investigation, said the state prosecutor of the responsible state Quintana Roo. Edgar Cortez, coordinator of the Mexican Institute for Human Rights and Democracy (IMDHD), has no doubt that there will be a punishment in this case.

In an interview with DW, however, he points out that "the problem is systemic and, apart from the 'major media events', there is no investigation and research within the institutions". The public prosecutor's office does not normally punish him either, according to Cortez.

The list of current cases of abuse by police violence is long, said Cortez. There is the case of the Mexican Oliver López, who was suffocated during an arrest in Tijuana; that of Alexander Martínez, a 16-year-old boy who wanted to run an errand for his mother and was executed by city police in Oaxaca; or that of the young mason Giovanni López, who was arrested, tortured and murdered in Guadalajara.

"In a recent survey by the National Institute for Statistics and Geography, 64 percent of those detained said they had been ill-treated by officers," said Cortez.

Between police officers, thieves and cartels

Most of the migrants from Central America have to go through Mexico in order to get to the United States from there. Due to the corona pandemic and the restrictive immigration policy of former US President Donald Trump, fewer people made their way through Mexico to the USA in the past year.

Migration has already increased again this year under Joe Biden. From January to March 25, the immigration service INM documented 34,993 arrested migrants, an increase of almost 28 percent compared to 2020. The way to the promised north has never been easy. There are a number of organizations that support migrants as well as hostels for safe accommodation. Nevertheless, the route is dangerous, says Díaz de León, director of the Institute for Security and Democracy (Insyde).

Apart from abuse by the authorities, people could become victims of "ordinary" crimes. Organized crime could also force them to "engage in contract killing or prostitution". The migrants are also at risk of being kidnapped to extort money from their families in the United States.

US pressure on Mexico to curb migration is not improving the situation either. Donald Trump turned the migrants into a kind of "leverage". Díaz de León believes that while the then US president was threatening trade sanctions if migration should not be stopped, Biden has now changed its strategy.

She is referring to the recent announcement by the US government that AstraZeneca will send 2.5 million vaccine doses to Mexico. Some experts believe that this "loan" is a strategic step - and that the US is expecting help at the border for it. Even if it is unclear whether Biden is actually pursuing such a strategy, the tone for the many migrants from Central America is likely to remain rough.