The mass suicide of the lemmings 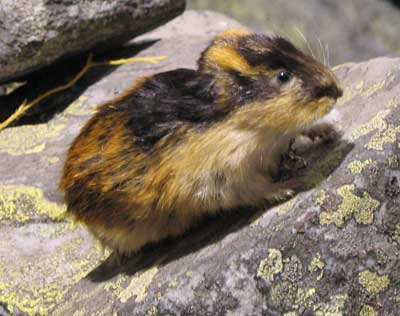 “The animals are very lovable. They look like little marmots or hamsters and in many ways resemble the latter in their essence. […] Their gait is tripping but fast, even if humans can easily catch up with them. ”This is how the German zoologist Alfred Brehm describes the lemmings in his reference work“ Thierleben ”from the 19th century. The myth of the mysterious has stuck to the arctic rodents for ages.

The most enigmatic animal in Scandinavia

Brehm himself mentions one reason for this in his work: “The lemming is definitely the most enigmatic animal in all of Scandinavia. Even today, the farmers of the mountainous regions believe that it rained down from heaven and therefore appeared in such an enormous number, but later on because of its greed for food it would spoil its stomach and perish. "

Although this is just a popular belief, there is a grain of truth in it despite everything. Because the strong population fluctuations in lemmings mentioned in the old legend are documented in 1924 by the British zoologist Charles Sutherland Elton. Then the animals reproduce in a four to five year cycle, initially moderately, then rapidly, before the lemming populations collapse again in a very short time. Then the whole game starts all over again.

A freak of nature?

This curious-looking freak of nature has long been the subject of diverse speculations. The most spectacular of them: an innate instinct is supposed to drive the lemmings to mass migrations after the population explosion. When they arrive at the sea, the animals rush off the cliffs and commit collective suicide. The supporters of this theory even postulated an altruistic behavior of the lemmings, with the aim of ensuring the survival of the species.

This notion, which has always been doubted by most scientists, was probably influenced by the 1957 Disney film “White wilderness”. Among other things, it says: “The lemmings are reaching the deadly abyss. This is their last chance to repent. But they keep running, plunge into the depths. ”The narration is underlaid with spectacular images that confirm this mass suicide - at least apparently.

Today, however, it is clear that the filming was apparently heavily manipulated and cheated. The newspaper "Jungle World" describes one of the tricks used on its website as follows: "What you don't see is that the Disney people previously grafted the little animals onto a rotating disk and let them hurl them into their doom."

And the weekly magazine Zeit reports in its column "Is it true?" With reference to research by the journalist Brian Vallee: "The Disney people helped, pushed and threw the little suicidal lemmings into the abyss."

In 2003, researchers finally provided decisive proof that the alleged mass suicides in Lemmingen are pure fiction and are based on popular fantasies of animal filmmakers ...