How do collectivism and individualism affect happiness?

Forest death, bird flu, swine flu, mad cow disease, nuclear disaster, nuclear war, mass unemployment, old age poverty, child poverty, vaccinations: there are many things that "the" Germans are supposedly or actually afraid of - whether it is justified or not. Our fear is sometimes so proverbial that it has been adopted in other languages: the notoriously optimistic Americans mock "German fear" about the social and political behavior of the German people, which they perceive as characteristic - for example, when we allegedly refuse or hesitate to use new technologies to quickly join our largest ally in foreign affairs.

As the first paragraph already suggests, different peoples are assumed to have stereotypical characteristics: In addition to the fearful German and the optimistic American, there are the always happy Brazilians, the serious and ambitious Chinese, the fun-loving Italians or the Russians who tend to be depressed - some of them are so far-fetched Things may be on a closer look.

However, two different lifestyles have really spread across the globe, according to which peoples can be classified, say Joan Chiao and Katherine Blizinsky from Northwestern University in Evanston. On the one hand, there are those individualistic forms of society in which the self-realization of the individual and their desires tend to take precedence over those of the group - examples of this would be the Anglo-Saxon countries of the USA, Great Britain and Australia. Opposite them are the strongly collectivist communities of East Asian countries such as China, Japan, Korea or Singapore, where social harmony and a sense of community are very important. Germany, the Scandinavian countries and France tend towards the individualistic direction, while Russia, Turkey and Latin America tend towards the collectivistic one.

But is this caused solely by social norms? Or do the genes also play a role in the development of these behaviors? And do these social systems also influence the development of states of mind? The serotonin transporter gene SLC6A4can, for example, influence how anxious a person is, according to the two researchers: A part of him, the section 5-HTTLPR, has either a short (S) or long (L) allele version. People with the short version have a higher concentration of the neurotransmitter in their synaptic fissures - the spaces between nerve endings and muscle cells, for example - than those with the long form.

Serotonin is generally regarded as the "happiness hormone", but this is not the case in this context: According to various studies, carriers of the S allele are more anxious, less willing to take risks, more easily influenced and more susceptible to bad news. And they are more at risk of developing depression - especially if they are exposed to chronic stress from arguments, personal loss, or danger. Owners of the L variant, on the other hand, are strongly attracted to positive words and friendly images. They are also considered to be less susceptible to psychological stress. However, these relationships are considered controversial.

Previous population genetic studies have shown that this abbreviated version is mainly represented in East Asian peoples: 70 to 80 percent of all Chinese or Japanese wear the S variant, compared with only 40 to 45 percent of Europeans. And in South Africa it is not even a third of the population that is equipped with it, according to the global comparison by Chiao and Blizinsky. The collectivist nations were predominantly at the upper end of the scale, while the L-shape predominated in the individualist states.

But although they should be genetically more susceptible to collectively falling into depression or developing states of anxiety, the scientists presented a completely opposite picture in this context. Peoples, in which social norms place the community above the self-realization of the individual, turned out to be much more psychologically robust than the individualistic competition: the masses are more likely to catch their fellow citizens here with problems. On the other hand, the more the individual in a nation is left to fend for themselves, the greater the risk that at some point in life they will become mentally ill - although their genetic makeup should actually make them happier.

Joan Chiao and Katherine Blizinsky attribute these astonishing differences to the so-called culture-gene coevolution of human behavior. This theory suggests that social norms such as individuality versus collectivism have evolved and inherited over time. A great sense of community is therefore particularly characteristic of peoples who are more affected by pathogens such as malaria, typhus or leprosy, according to the two researchers. The renunciation of self-fulfillment and promoted conformity would have helped to keep the spread of epidemics in high-risk areas in check - a social restriction that was not necessary in the northern countries with their "healthier" climate.

This feedback between the genes and the socialization of a society could just as well have developed to maintain mental health, say Chiao and Blizinsky: Because social harmony is so important, the risk is reduced that, despite negative genetic predispositions, larger parts of society are reduced fell into depression. People with the S allele in individualistic societies would therefore have problems in particular: their greater susceptibility to negative news meets an environment in which self-actualization and, in some respects, egoism are the norm. Their worries and needs make it difficult for them to make appropriate social contacts, which in turn are the best precaution against anxiety and depression.

However, the scientists point out that the collectivism of the Chinese, for example, could also somewhat distort their study: In these cultures, mental problems are more often associated with a social stigma. For fear of "losing face", those affected could conceal any suffering. It would therefore be interesting to observe the extent to which genes or social characteristics ultimately have an impact in the changed environment when both cultures meet - for example in the case of Chinese who have emigrated to the USA.

And the "German fear"? Compared to the US case numbers in mental illness, we actually do not do that badly. But maybe we can still develop a little more sense of community. 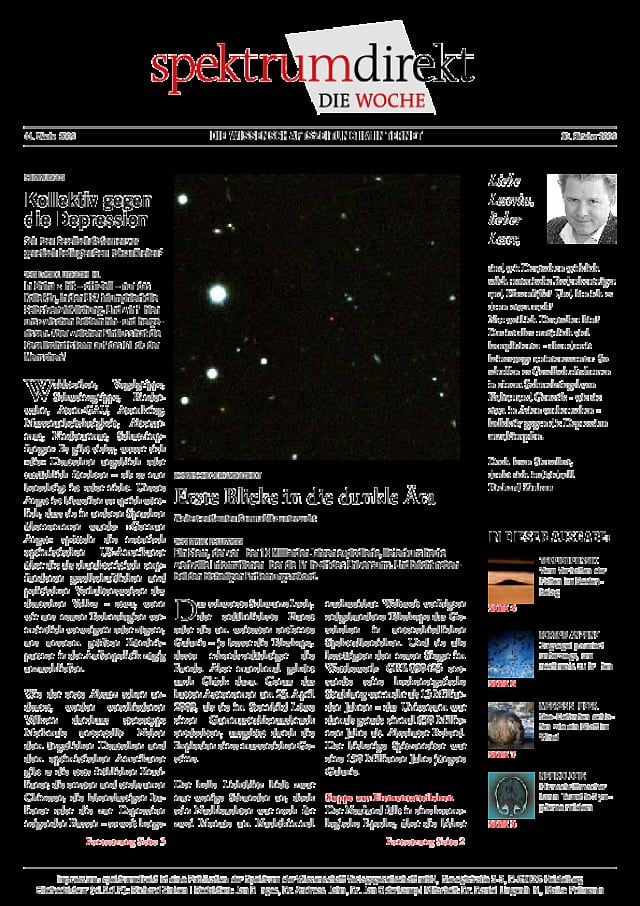