What is the fastest mode of transport

Many students probably dream of meeting Tesla founder Elon Musk one day. But how about being invited to LA and celebrated by him? This is the fourth time that students at the Technical University of Munich have experienced this. 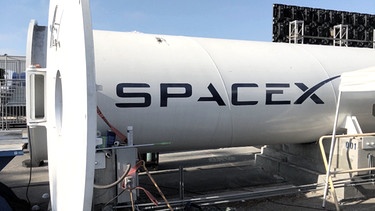 The competition was held in this vacuum tube.

Elon Musk provides the vision. And hundreds of the best mechanical engineering universities in the world are putting it into practice. The Hyperloop is supposed to be a maglev train that speeds through a vacuum tube at over 1000 km / h. The route Munich-Berlin could be done in about 30 minutes. The Hyperloop is set to become the fastest means of transport in the world.

Exactly the right project for the student association WARR e.V. of the Technical University of Munich. After all, the association is officially called the “Scientific Working Group for Rocket Technology and Space Travel”.

2018 year Elon Musk had invited. The TU students were ready to defend their title. And it worked. For the third time, the WARR team from the Technical University of Munich has won the Hyperloop Pod competition in Los Angeles. The capsule reached a new top speed of 467 kilometers per hour in the 1.25 kilometer long tube. BR 24 reports: 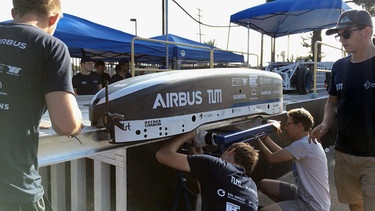 The Hyperloop Pod of the TU Munich team.

Hundreds of universities from all over the world applied to Elon Musk as early as 2016. They wanted to prove that they could build the fastest Hyperloop Pod - as the vehicles are called. A showdown took place in a vacuum tube near Los Angeles in early 2017. The team from the Technical University of Munich was in the lead in the end.

In August 2017, Musk invited to such a competition for the second time. The TU team took part again, says one of the two technical directors, Florian Janke. 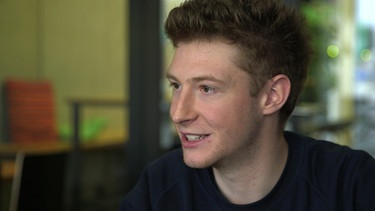 "We developed the whole device in 5-6 months. The moment we actually drove it to the USA was indescribable."

The students arrived in the US in August with high hopes. But then there were complications:

"We arrived in LA. And as soon as we tried to start the engine, nothing happened. It died immediately."

Despair spread - what had the students overlooked? They went through the whole technique again, checked every cable. The engine is a custom-made product with "very high technical requirements", says Janke. A wrongly installed cable can mean the knock-out.

"You need time to do something like that. And time is the one thing you don't have in a competition like this." 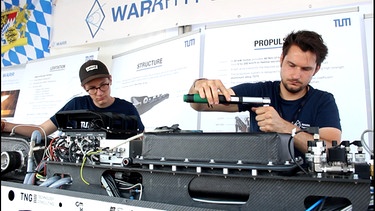 Final work on the Hyperloop Pod before the race.

They built the Hyperloop Pod in the so-called Maker Space, which the Technical University of Munich operates together with UnternehmerTUM GmbH. Students are allowed to use industrial machines here. From laser cutters to 3D printers, numerous machines are available in Europe's largest public workshop.

In addition to the Maker Space, there are other offers with which the Munich University primarily supports young company founders. They get offices, work rooms, financial support or mentors explain everything they need to know when setting up a business. 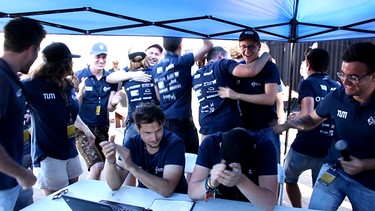 Big cheers for the team of the Technical University of Munich after the race.

The student association's Hyperloop Pod had worked on the test stand in Maker Space. But in August in LA the engine stalled for days. Eventually they got it to work. Then another setback in a test run. The engine switches off at 40km / h. Far too little to win the competition. In the end, they only had one last attempt. A video of the run shows the tension on the faces of the students. Were all your night shifts at Maker Space for free?

But then what no one expected: Your Hyperloop Pod shot through the tube at 324 km / h. More than three times as fast as the second-placed team. The TU duped the entire world elite. Elon Musk clapped his hands enthusiastically, the students cheered and fell on their necks.

"That was when the tears came to me at that moment. I've gone through so many ups and downs, and then everything falls away and you're just happy."