Are Hungarians and Romanians genetically Slavic

All Europeans are genetically one family

Europeans are more closely related than assumed: Even people who are separated from one another by the entire continent, such as Irish and Turks, have the same ancestry. And these common ancestors only lived a thousand years ago - in other words, compared to human history, almost yesterday, as US researchers report in the specialist magazine "PloS Biology". Their DNA analyzes of around 2,500 people also show what traces history has left on our genes.

Usually, the further away someone lives, the less likely they are to be closely related to us. Of course - especially in times of globalization - there are now plenty of exceptions, but spatial distance has played an important role for the longest time in human history. Geographical separation gave rise to different cultures and shaped peoples. On the other hand, people have always migrated over great distances, for example in the era when agriculture began to spread across Europe from the Mediterranean.

How closely related the Europeans are to one another was previously unclear. “The recent history of human populations is a complex mosaic of individual migration, large-scale population movements and other demographic events,” explain Peter Ralph and Graham Coop from the University of California at Davis. A look at our genetic make-up can provide information about the relationship.

Related despite a great distance

For their study, the researchers evaluated the DNA of 2,257 Europeans from very different regions of Europe. They looked for DNA segments that would be passed on as a block almost unchanged when inherited to the offspring. The more generations these sequences have gone through, the higher the probability that they have been broken up, shortened or changed. The length of these common blocks shows how long ago the last common ancestor of two people was.

The result: on average, every European has around 831 such DNA blocks in their genetic make-up. "We discovered a total of 1.9 million of these long segments and determined the distribution of the ancestors of our test subjects in time and space," the researchers explain. As expected, it was shown that the degree of common ancestors decreases with increasing distance between two people - but significantly less than expected. Even Europeans from opposite ends of the continent still share millions of genealogical ancestors, as Ralph and Coop report. “It is remarkable how closely everyone is related to each other,” says Coop. "On the genealogical level, every person in Europe goes back to almost the same set of ancestors living a thousand years ago as everyone else." 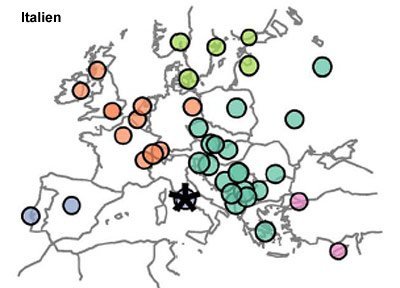 The genetic data also clearly reflect decisive events in European history: For example, Italians are on average less closely related to one another and to other Europeans. Their common ancestors are older than those in other areas. "In addition, there is a clearly distinctive substructure of genetically demarcated population groups in Italy," the researchers explain. This can be explained by the fact that precisely this region of Europe was very often populated in the past by changing cultures of different origins. In addition, this also partly reflects the geographical isolation of populations within Italy.

Conversely, many people in Eastern Europe are more closely related than those in the West. According to the scientists, this is also a trace of history: because they go back to a small group of common ancestors who came to Europe from the east at the time of the Huns. They first settled in Hungary and Romania and then spread far to the west and north. Then around 600 AD the ancestors of the Slavic peoples moved up and settled the eastern part of Europe.

Traces of migration can also be seen in the genetic make-up of the British: most of them are more closely related to any Irishman than to any other inhabitant of the British Isles. As the researchers explain, this reflects the high level of Irish immigration to the UK. “This is why many Britons have Irish ancestors and are therefore more closely related to them than to a British who is not descended from Irish immigrants,” explain Ralph and Coop. (PloS Biology, 2013; doi: 10.1371 / journal.pbio.1001555)