How does thinking work

Thoughts are invisible electrical currents that the billions of nerve cells use to "talk" to each other, i.e. absorb, exchange and process information. 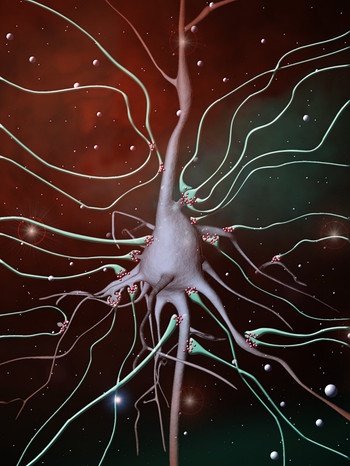 Synaptic contact: Representation of the transfer of excitation from one neuron to another cell

With every thought, networks of Neurons together in the cerebral cortex. There is no central point that captures the individual thought, rather a thought is always scattered over the entire brain at the same time. A huge number of electrical signals spread through our heads at lightning speed. But the knowledge that electrical impulses flow from one nerve cell to the next does not say anything about their meaning. So how the brain develops a coherent impression from these signals, which for example corresponds to that of a vacation memory in the past, remains a mystery to this day.

Exchange of nerve cells via synapses

It is not just the performance of the individual nerve cells that is important for our brain performance, but how the exchange between them works. The information must be passed on from cell to cell. "Synapses" are the name of the connection points, a kind of narrow gap between the individual nerve cells that enable information to be transported in all directions. It works in such a way that one nerve cell releases a substance that the next perceives and passes on. Only when everything is well networked can we walk, speak and think.

All thoughts arise in the brain, most of them in the cerebrum: whether we think in pictures, as in dreams, or imagine motion sequences or remember feelings. The nerve cells are always "firing", as brain researchers call it. This means that every sensory impression arrives at several nerve cells in the brain at the same time and stimulates them. This makes thousands of cells active.

Every single thought leaves its own, unmistakable pattern, a kind of imprint in the brain. Experts can read and interpret these patterns to make them visible. Just as there is a specific fingerprint, a very specific thought print is created. With magnetic resonance tomographs, brain activities can be followed and compared with one another in several test subjects.