What is the UNPO Chagos Relationship

David versus Goliath: The Chagos Islanders in the fight for their homeland versus Great Britain and the USA

David versus Goliath: The Chagos Islanders in the fight for their homeland versus Great Britain and the USA

The Chagos Islands are a tiny archipelago in the middle of the Indian Ocean, so far off the beaten track that hardly anyone would have heard of this little paradise if England and the USA had not chosen it for their selfish interests more than 40 years ago. The Chagossians lived on the numerous, scattered islands, surrounded by idyllic white sandy beaches and green vegetation. They did not live surrounded by luxury, but the sea was excellent for fishing, the land was fertile and there was work on the numerous coconut plantations. The community, composed largely of settlers from India and Africa, had built a society that included villages, hospitals, churches, and schools. But their lives were to change suddenly in 1968, and most of them would never see their island again. 1)Inside Housing: Injustice upon injustice: the story of the Chagos Islanders; As of today, July 1st, 20202)The Guardian: Chagos Islanders remind us that Britain is a shameful coloniser, not a colony; As of today, July 1st, 2020

"No indigenous population will remain there except the seagulls." 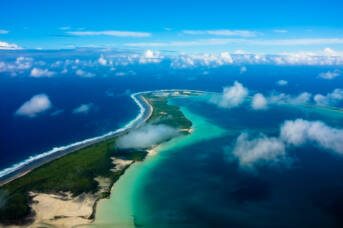 By the end of the 1960s it should become clear why the British clung to the Chagos Islands so vehemently. Britain wanted to create space for the construction of a strategic US military base on the Chagos island of Diego Garcia. The chain of islands was declared "British Indian Ocean Territory" (BIOT) by the British Foreign Office, and Diego Garcia was leased to the United States for $ 14 million for "defense purposes" for 50 years under a top secret agreement as early as 1966 (this lease was later can be extended again until 2036 in strictest secrecy).

The only remaining "problem" for the USA and Great Britain were now the Chagossians, who were still on the islands and who they wanted to evict by any means. A high-ranking member of the US State Department reported at the time, referring to the Chagos Islands: "No native population will remain there except the seagulls." The then 1,500 or so locals were forcibly removed from their homes and put on ships. Their pets were gassed and their homes destroyed. They were transported to Mauritius and the Seychelles, where they were simply abandoned at the ports and left to their own devices.

Marie Liseby Elysé, a Chagossian who was expelled from the colonial administration in 1973, recalls the inhumane treatment she was given at the time: “The ships that came from Mauritius brought all of our goods. But one day the manager told us that we had to leave our island. We didn't have a choice. The ships that brought us food stopped coming. We didn't have anything to eat. We didn't have any medication. Nothing at all. We suffered a lot. But then one day a ship called Nordvaer came. The British caretaker told us we had to get on board the ship, leave all of our personal belongings but a few clothes, and leave. When we boarded the ship, the conditions were miserable. We were like animals and slaves on this ship. As for me, I was four months pregnant at the time. It took the ship four days to reach Mauritius. After our arrival, my child was born and died. ”Unsurprisingly, after their abandonment, the Chagossians lived in poverty in the corrugated iron slums of Mauritius and the Seychelles, where they struggled for work and acceptance. In addition, the British strictly forbade them from even setting foot on their home islands. 6)Inside Housing: Injustice upon injustice: the story of the Chagos Islanders; As of today, July 1st, 20207)The Guardian: "It's heartbreaking": the Chagos Islanders forced into exile; As of today, July 1st, 20208)The Guardian: UK suffers crushing defeat in UN vote on Chagos Islands; As of today, July 1st, 20209)The Interpreter: Diego Garcia: To
American perspective; As of today, July 1st, 202010)Cultural Survival: Chagossians-the original inhabitants of Diego Garcia face U.S. government in the court; As of today, July 1st, 2020

The UK does not respect international judgments

Anyone who believes that the injustices to which the islanders were exposed are now a thing of the past is mistaken. Despite a recommendation by the International Court of Justice in 2019, the Chagossians are still being prevented from returning to their home island by the English government. Even after 116 countries voted for a motion at the UN General Assembly in 2019 setting a six-month deadline for Britain to withdraw from the Chagos chain of islands and reunite the islands with neighboring Mauritius, Britain is still holding on to the archipelago firmly. Only a measly 6 votes supported the US and UK view that the Chagos Islands legally passed into British possession in the 1960s and must therefore remain British territory.

This devastating defeat of the two great powers came despite Washington's energetic lobbying and discussions with national governments around the world. Great Britain still does not want to adhere to the resolution and rejects it. In London, the government stressed the importance of the partnership with the US on the Diego Garcia military base. "The joint British-American defense facility on British Indian Ocean territory is helping to protect people in Britain and around the world from terrorism, organized crime and piracy," said a British Foreign Office spokeswoman.

There was of course no mention of the fact that in the early 2000s the Americans were demonstrably using Diego Garcia as an island on which terror suspects were interrogated, illegally tortured by the CIA and then taken to the now infamous prison camp in Guantánamo Bay. However, Professor Philippe Sands QC, who represented Mauritius before the International Court of Justice, said: “The failure to implement the [International Court of Justice] judgment and the decision of the General Assembly is lawless and deeply regrettable, an expression of the persistent colonial mindset. It also undermines Britain's supposed commitment to the rule of law. " 11)The Guardian: Chagos Islanders remind us that Britain is a shameful coloniser, not a colony; As of today, July 1st, 202012)The Guardian: UK suffers crushing defeat in UN vote on Chagos Islands; As of today, July 1st, 202013)The Guardian: Labor would return Chagos Islands, says Jeremy Corbyn; As of today, July 1st, 2020

"At home was paradise" 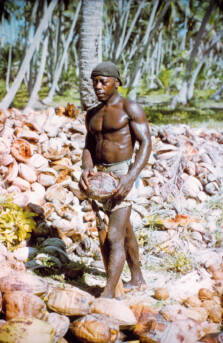 Still, the judgments gave hope, especially to the older generations of Chagossians who still have vivid memories of their homeland, that they might one day be able to see their homeland again. Decades of forced exile have scattered the Chagossian communities around the world. Most live in Great Britain, Mauritius or the Seychelles. None of them were allowed to return, with the exception of the five group visits, heavily orchestrated and organized by the British government, which allowed 76 exiled Chagossians to visit the graves of their ancestors and spend up to a week in the archipelago.

It is to be hoped that after decades, Great Britain will finally see its injustice and comply with international resolutions. The 81-year-old Chagossian Samynaden tells Rosemond with a smile: “At home was paradise.” He currently lives in Mauritius with his wife Daryela in a small house on the outskirts of the capital Port Louis. “The British didn't give us a chance. They just said, “Oh, this is no longer yours.” “If I die here [in Mauritius], my spirit will be everywhere - it would not be happy. But if I die there, I will rest in peace ”, were his moving words. 14)The Guardian: "It's heartbreaking": the Chagos Islanders forced into exile; As of today, July 1st, 202015)BBC News: Chagos Islands dispute: UK 'threatened' Mauritius; As of today, July 1st, 2020