With Measuring the Universe I once again dared to write a book by Lisa Randall that deals with particle physics and that should answer the question, "How the physics of tomorrow will track down the last secrets"as the subtitle of the book says so beautifully. 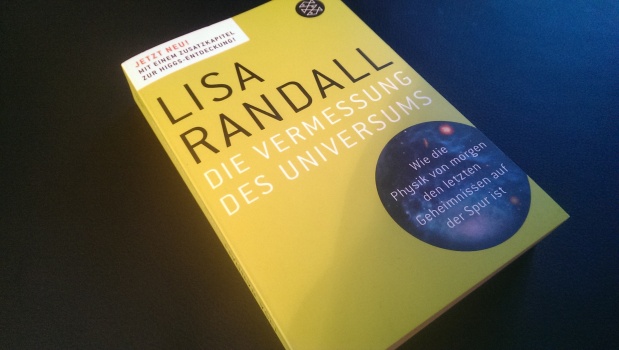 Lisa Randall is a very successful theoretical physicist and with this book she tries on the one hand to explain how science works in principle, and on the other hand to illustrate how the current, concrete search for new particles is carried out. Accordingly, one first learns a lot about the history and theory of science, starting with Galileo through Newton to Einstein. Unfortunately, in my opinion, these passages are quite dry and abstract. Some more colorful examples would have made it easier to read here.

However, I liked one sentence incredibly well because it pointedly expresses what excites me so much about science: "Science is the epitome of creative endeavors in a restricted environment". Although it may not be clear to many, being a scientist often means working creatively. You think of experiments that are as elegant as possible to answer interesting questions. At the same time, however, you are always limited, as results basically show the way and limit the possibilities. Apart from the fact that not all experiments are technically feasible and scientists have to deal with these obstacles.

The book is strong when it comes to the LargeHadron Collider (LHC) at CERN. In 2012, after a long search, this particle accelerator finally found the Higgs boson, a particle that is responsible for giving mass to other particles with which it interacts. Randall explains how the largest machine ever built was built, how the gigantic detectors are constructed and what principles and mechanisms the detection of particles is based on. In my 2013 edition there is also an additional chapter on how the discovery of the Higgs boson came about. For me as a layman it was a bit too technical every now and then and I didn't understand everything - but it wasn't a problem, it was definitely great to get such an insight.

The LHC has also sparked a lot of discussion because some people feared that the energies of particle collisions could be enough to create tiny black holes that suck up the earth. Randall explains in great detail that this does not work that way and that such concerns are not justified - and so far the earth still exists ... In connection with this topic, it is also quite a long time how to make a correct risk assessment. And there are constant comparisons with the financial system and its crises and that the risks have not been properly assessed here. I found these passages pretty misplaced and, in my opinion, would not have needed them.

Clearly better, however, are the sections that address how the LHC could contribute to the explanation of dark matter and what it is supposed to be useful for, now that the Higgs particle has been proven.

Overall, my impression of the book is divided. On the one hand, I have not yet read a book that describes the concrete work of particle physicists so vividly. On the other hand, I found the book rather weak when it left this subject. In any case, I would have liked it better if Randall's book had become a bit leaner and focused on the search for new particles.