What is the North Korean Military Strength

The situation on the Korean peninsula is more tense than it has been for a long time. The new US administration under President Trump has rejected the policy of "strategic patience" still pursued by Obama towards North Korea. As a result, US Secretary of State Tillerson stressed during a visit to South Korea that the military option is always on the table. In May, the US imposed new and tougher sanctions.

China, which is regarded as North Korea's only ally, is insisting on a diplomatic solution to the conflict, but has also increased the pressure on Pyongyang. For example, coal imports from North Korea, which represent an important source of foreign currency for the isolated country, have been discontinued. Commentators for the nationalist Global Times accused North Korea of ​​destabilizing the peninsula and called on the country to suspend its nuclear program.

But North Korea seems to have been little impressed so far. The dictatorship has tested rockets five times since January 2017, violating UN resolutions each time. Experts are observing increased activity at the Punggye Ri nuclear test site. Another nuclear test could be imminent. In the statements of the state media, North Korea declared that it would be ready for an "all-out war" at any time.

Two of the largest armies in the world have faced each other on the Korean Peninsula since the Korean War - which was frozen with a ceasefire in 1953 but never officially ended. According to the index of the International Conversion Center (BICC) in Bonn, South Korea is one of the most militarized nations in the world. It ranks sixth worldwide on the index last updated in 2016. Since important information on North Korea is missing, it is not included in the index, although it can be assumed that there is also "a high degree of militarization," as Marius Bales of the BICC says. "That is obvious when 1.2 million of the 24 million inhabitants serve in the military."
Behind the two highly armed Koreas are their respective allies, who are also rivals. On the North Korean side, the People's Republic of China, on the South Korean side, the USA. The South Korean-American relationship was enshrined in a military alliance in 1953. In 1961, North Korea signed a friendship treaty with China and Russia, which included mutual military and economic aid. Russia canceled the military assistance pact, and it is still in force with China. Japan, which also feels threatened by North Korea, has a special role, as it is closely allied with the USA, but has a relationship with South Korea that has been strained by the colonial past and the Second World War.

One way of describing the military balance of power in the region is to list the armed forces in each case numerically (see graphic). However, such an approach is fraught with a number of difficulties. 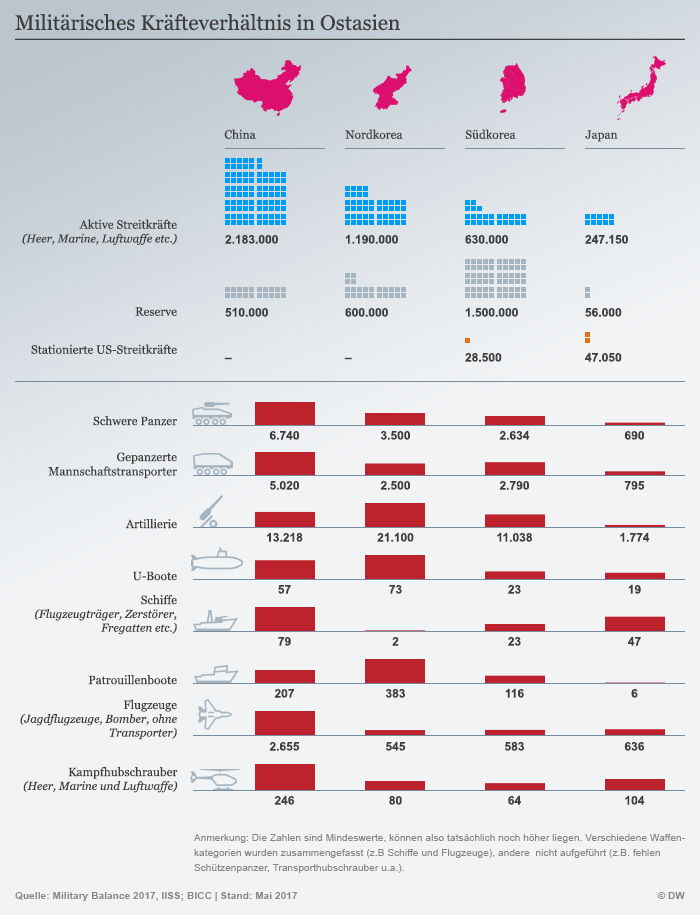 One way of describing the military balance of power in the region is to list the armed forces in each case numerically (see graphic). However, such an approach is fraught with a number of difficulties.

First, the numbers should be viewed with a certain amount of caution. The annual publication "Military Balance" by the British think tank International Institute for Strategic Studies (IISS) has a kind of monopoly. There are other sources on armed forces, such as those of the Stockholm International Peace Research Institute (SIPRI), but only in the IISS's "Military Balance" is the armament and the military sector so comprehensively documented. The figures are based in part on the official information provided by the states, for example, to the UN Arms Register or the Organization for International Cooperation (OSCE). There are also figures from arms export reports. However, IISS does not specify all sources, nor is a uniform method defined. It is therefore unclear how the figures for countries like North Korea, which officially does not publish any data, come about. But there is no alternative, as Bales from BICC admits: "The Military Balance is the best, but also the only source in the field."

Second: "The numbers only represent the quantity. They say nothing about the quality of the weapons," says Bales. A heavy tank is not just a heavy tank. A Soviet T-62 from the North Korean Army from the late 1960s and a South Korean K2 Black Panther from 2013 cannot be counted one-to-one against each other. In general, the idea that one counts soldier against soldier and tank against tank, as in the 19th or early 20th century, is obsolete. "Modern warfare and modern weapon systems prohibit that." Tanks stand against tanks, but also against drones, helicopters, planes, etc.

The figures also do not show how many resources are available to operate the respective weapon category. North Korea notoriously suffers from a lack of fuel, which affects training flights. "In the case of North Korea," says Bales, "the size of the military contrasts with its quality. The air force in particular is outdated. The most modern jets date from the 1980s." In contrast, South Korea has state-of-the-art weapons systems thanks to US and German arms deliveries.

What the numbers do show, however, is what focus the respective armies of the countries have. While the navy and air force are the focus in the island nation of Japan, in both Koreas it is the army. The relatively high number of heavy tanks and artillery pieces in North and South Korea show that their armies are designed for large-scale field battles and defending the borders. The large number of North Korean submarines can be attributed to their high deterrent potential. And that is what the figures also show, namely the determination of all countries to defend themselves militarily. 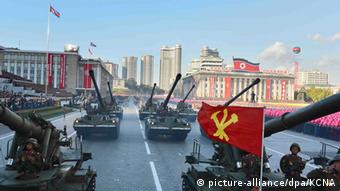 The North Korean military proudly presents its latest acquisitions at a military parade.

However, all of this would be comparatively meaningless if the huge US military machine were to intervene in a possible conflict. A look at the strategic missile troops, which are responsible for long-range missiles including nuclear weapons, makes this immediately clear. China and the US have such units, unlike South Korea and Japan. North Korea is striving, but has great problems, in developing reliable long-range missiles. The US is so advanced in arms and technology that North Korea would hardly stand a chance.
"With all the technical considerations, one must not forget the mutual vulnerability of North and South Korea," says BICC expert Bale. Around 70 percent of North Korean ground troops are stationed on the border. Seoul is only 50 kilometers from the border. "Even with outdated technology, a devastating attack on South Korea can be carried out with the large number of tanks, artillery and personnel carriers."