Is Motorola One Action worth buying

Motorola One Action in the test of the trade magazines

to Motorola One Action

Customer reviews (734) about Motorola One Action

Average of 734 opinions in 1 source

Write your own opinion

Assessment of our authors

An action cam in the guise of a smartphone

A triple camera for video fans 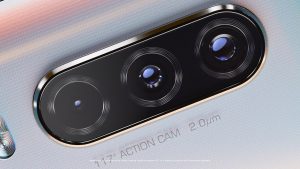 The camera module in One Action (Image source: motorola.de)

The focus of the new Motorola One Action is clearly on the cameras. This is made clear by the front camera with a resolution of 12 megapixels and an aperture of f / 2.0, which is comparatively bright for selfie cameras, and which can also handle videos in 4K. But the real highlight is the triple camera on the back of the device, which not only offers three different recording options such as wide angle, telephoto and normal as is so often the case. Instead, a classic 12-megapixel main camera is used, which has been supplemented by a 5-megapixel depth sensor. The third lens does not add another type of viewing angle to this duo, but is rather a specialized video camera that can only shoot videos and is aimed at sports enthusiasts.
The action cams, which are currently particularly popular in outdoor sports, score with wide-angle optics, high frame rates, robustness and ease of use - and this is exactly what Motorola promises for the special camera in the new One Action. It is an ultra-wide-angle lens with a resolution of 16 megapixels, which is quite a lot for an action cam. The high resolution is used to calculate a higher image quality, because in the end the videos are still saved in the classic way in Full HD (60 fps) or 4K (30 fps). In this case, four pixels are simply added to a saved one, which is particularly useful in poor lighting conditions. You can shoot slow motion as well as time lapse or hyperlapse videos. Clever: Motorola installed the sensor for the camera horizontally - so you can record video in landscape format if you hold the phone upright with one hand!

The camera is the reason to buy, but other small details are also pleasing 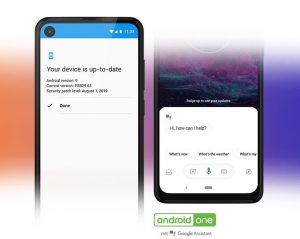 Apart from the special camera pairing, the Motorola One Action is more of a solid mid-range smartphone. It is powered by a Samsung Exynos 9609, which is supported by 4 GB of RAM. The 6.3-inch display comes in 21: 9 format and shows the rotated videos appropriately large, but only offers full HD resolution. At best, you can see 4K on a television or PC monitor. On the other hand, the internal memory, which is 128 GB, is positive, and a microSD card can increase it further. If you want to use it, you will unfortunately have to do without a second SIM card, as it is a so-called hybrid slot. The 3,500 mAh battery is also rather mediocre and cannot be exchanged, but it can be quickly charged via USB-C.
The Android warranty is remarkable: the Motorola One Action is guaranteed to receive all Android security updates for three years and every new Android version for two years. Since the device is shipped from the factory with Android 9.0 Pie, you can look forward to Android 10. The fact that the device still has a jack for headsets and headphones is also worthy of praise. Because the idea of ​​completely replacing the jack via USB-C often only causes problems for users: Affordable USB-C headsets are currently still in short supply - and if they do, the sound and service life are considered to be inadequate. Amazon is full of disappointed reviews. You avoid this with the One Action.

To buy? Definitely after further updates!

The Motorola One Action is very fairly priced at 260 euros. The mid-range technology is solid, the special camera and Android guarantee are nice gimmicks that are seldom found in this price range. Unfortunately, of all things, the action cam is currently not quite at the expected level. In the first tests, the image stabilizer does a good job and the images are very sharp and well lit. However, there is always talk of an annoying flicker that runs through the recordings. This is likely to be a software problem that will be eliminated with future updates. Nevertheless, it makes sense to wait a little longer with the purchase until Motorola has readjusted here. Once this has happened, we will also give you a clear recommendation to buy!