You can start a slide show by clicking on an image. You get to the next picture by touching the picture with the mouse and pressing or - or with the keyboard: for the next picture and for the previous picture. 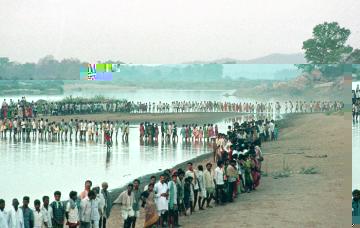 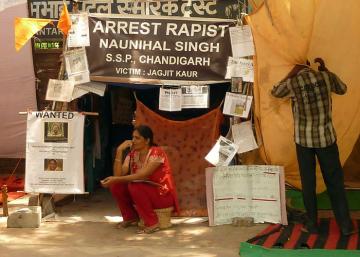 Description: Delhi, India 2013. Solidarity protest at Jantar Mantar in Delhi for Jagjit Kaur, the Senior Super Intendent of Police (SSP) Naunihal Singh from Chandigarh in 2009 for rape. The court has dismissed her charges several times due to a lack of evidence and allegedly there are proceedings against the accuser herself. The case continues to be controversial. (Text: Photo editing) - Photo information: Solidarity with Jagjit Kaur

I am Anna Hazare 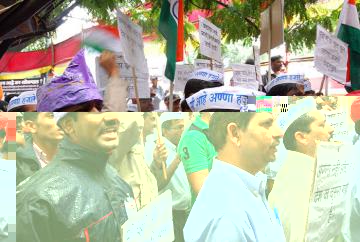 Description: Pune, India 2012. In the industrial city of Pune, many citizens show solidarity with the farmer's son Anna Hazare, who in 2011 and 2012 led a nationwide protest movement against corruption. On the customary white caps in Marathi it says: "I am Anna Hazare". - Picture information: I'm Anna Hazare

Shahbag protest in Dhaka I 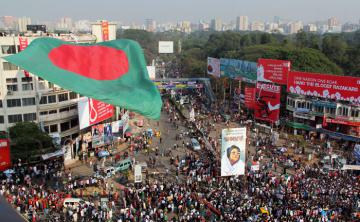 Description: Dhaka, Bangladesh 2013. When the second verdict in the ongoing war crimes trial was passed in Bangladesh on February 5 this year, just a few hours later young people occupied one of the most important intersections in the capital Dhaka. This spontaneous protest, organized via social networks on the Internet, met with broad support from all generations and was to become a synonym for a new protest movement in the next few weeks under the name Shahbag, the district in which thousands of demonstrators gathered every day. While similar protests initiated by young people in Middle Eastern countries received widespread media coverage, the protests in Bangladesh received only marginal coverage. One of the reasons may be the main demand of the protesters, with which target groups of 'Western' media can only identify with difficulty: the death penalty for all war criminals. The protests started with the fact that on February 5th the war criminal Abdul Quader Molla was 'only' sentenced to life imprisonment. (Photo: Gopal Das, Text: Carmen Brandt) - Photo information: Shahbag protest in Dhaka I 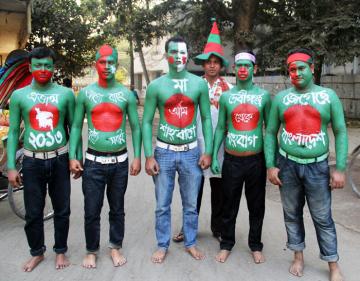 Description: Dhaka, Bangladesh 2013. However, it was above all the call for the death penalty that met with widespread support among the Bangladeshi population, even if others later, such as after a ban on the Islamist party Jamaat-e-Islami, to which many accused of war crimes belonged , were added. The fact that representatives of the younger generation formulated this radical demand may not come as a surprise, given the way in which the history of the origins of Bangladesh was dealt with in the country itself. The independence of the former East Pakistan from West Pakistan in 1971 was decided by one of the bloodiest wars in recent history and is rightly called the genocide of the people of Bangladesh. While the green of the flag symbolizes the lush landscape, the red is reminiscent of a rising sun, but above all of the blood that was shed during the struggle for independence. Even if there was never any official confirmation, the number of three million victims and the heroic deeds of the freedom fighters are firmly anchored in the cultural memory of many Bangladeshis. (Photo: Gopal Das, Text: Carmen Brandt) - Photo information: Shahbag protest in Dhaka II 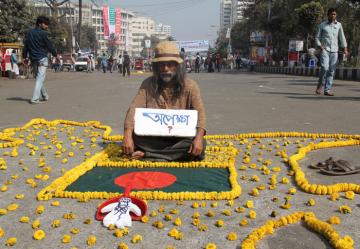 Description: Dhaka, Bangladesh 2013. Despite decades of conditioning the population to martyrdom and patriotism, there was never a serious dispute with the Bangladeshis, who in 1971 did not fight for independence, but as razakars, i.e. volunteers in the West Pakistani army, for the unity of Pakistan. Although people like Jahanara Imam, whose portrait was on the Shahbag intersection, had campaigned for the punishment of war criminals before, the first relevant charges were not made until 2010. The main reason for this is the political influence that many convicted war criminals have, e.g. in the Jamaat-e-Islami, the coalition partner of the last elected government. A war crimes tribunal could only be formed after the change of government. The charges included kidnapping, torture, genocide and rape: crimes that the younger generation grew up with in images and stories. The fact that the families concerned had to wait so long for war criminals to be punished seemed unfair, but the young people were angry that despite the convictions, 'only' high prison sentences were sometimes given. (Photo: Gopal Das, Text: Carmen Brandt) - Image information: Shahbag protest in Dhaka III 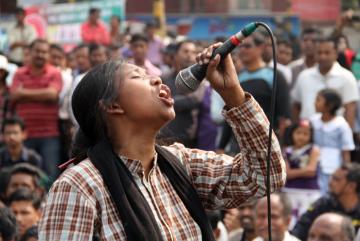 Description: Dhaka, Bangladesh 2013. This anger surprised many elderly people in Bangladesh who had declared the younger generation to be apolitical. Indeed, many Shahbag activists describe themselves as apolitical, but many equate the term political with partisan. Right from the start, care was taken to ensure that the protest was not instrumentalized by parties, and it was not uncommon to see party politicians having their microphone torn away in order to hand it back to unknown, 'non-political' people. Young women like Lucky Akter in particular became icons of the protest. However, the initial euphoria is now gone, the Shahbag intersection is open to traffic again, and only when a new verdict is announced will people gather there to either celebrate a death sentence or to protest against a prison sentence. The fact that the protests are not led by a thirst for blood, but by the fear that all convicted war criminals will be free again after the next change of government at the latest, is made clear by the non-violence of the protesters, although many have meanwhile themselves been victims of violent attacks. (Photo: Gopal Das, Text: Carmen Brandt) - Photo information: Shahbag protest in Dhaka IV 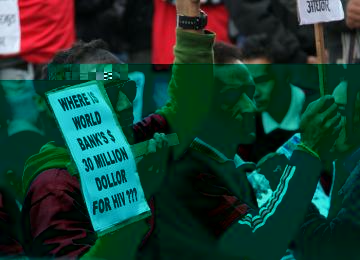 Description: Kathmandu, Nepal 2010. During World AIDS Day 2010 in Kathmandu, a group of HIV / AIDS activists protested ("Where is the World Bank's US $ 30 million for HIV?") While the official program is on the main stage (not in the picture) "plays". - Picture information: World AIDS Day in Kathmandu 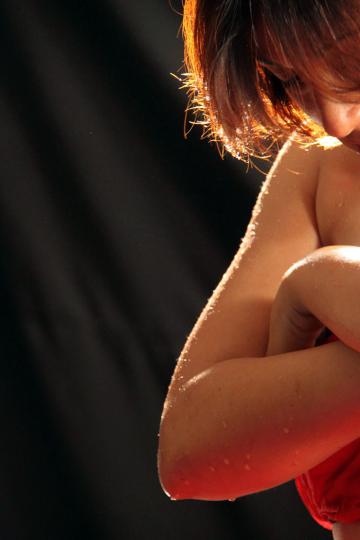 Description: Kathmandu, Nepal. A transsexual has agreed to work on a video art installation that requires being completely naked - an absolute taboo in the predominantly Hindu-Buddhist Nepal. As a result, the person insists on anonymity. On the occasion of World AIDS Day, the video will be shown as part of an exhibition together with nude painting; all models are HIV / AIDS infected. - Image information: video art for World AIDS Day 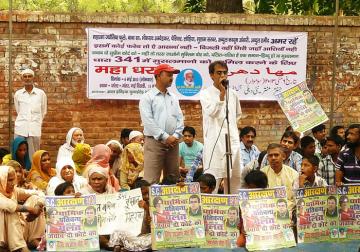 Description: Delhi, India 2013. Indian Muslims are demanding quotas as "Scheduled Castes". This category includes members of socially and economically discriminated caste groups, who thereby receive a right to quotas in the education sector and in employment at state institutions. The protesters are calling for such a quota system for Muslims under Article 341 of the Indian Constitution. On their posters they threaten: "Challenge the Supreme Court or you won't get any votes from us!" (Text: Photo editing) - Image information: Muslims are demanding quotas

Posters against environmental destruction in Bandhavgarh 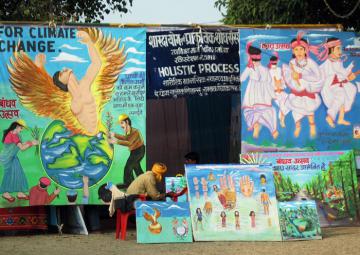 Description: Bandhav Utsav Tala, 11.-15. February 2010 in Bandhavgarh (Madhya Pradesh), India. Bandhavgarh has been a national park since 1968, which is particularly worthy of protection due to its high biodiversity and species richness. It is also one of the few remaining habitats of wild tigers in India and is therefore becoming more and more touristy. During the five-day festival "Bandhav Utsav" in the village of Tala, numerous local NGOs drew attention to the threats to the environment and the cultures of the various indigenous peoples in the region. In addition to stands with local "fair" products, political speeches and cultural presentations, posters were designed to provide visual information about the existing problems. - Photo information: posters against environmental destruction in Bandhavgarh

Take back the night! 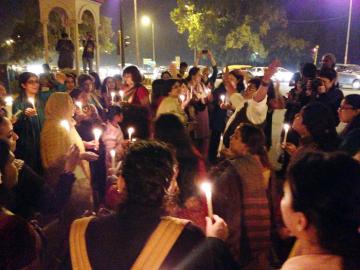 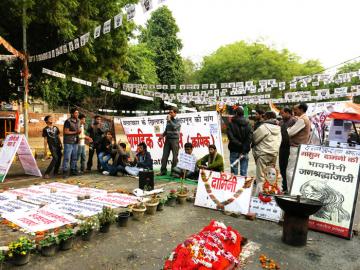 Description: Delhi, India 2012. Protest against the gang rape of a student in New Delhi on December 16 after the victim died in a Singapore hospital. The protest takes place at a very popular and almost Delhi's only legal protest location, on a small street near Parliament Street, Janter Manter and Connaught Place. In this case, various small and large protest groups gathered for weeks after violent clashes between protesters and police forces near the India Gate. The photo shows a poster that reads in Hindi "Towards making stringent laws against rape, to perform our duty towards society- against police and governmental autocracy. Save Democracy, Student-youth resolve / Resolution Rally", organized by Student-Youth Revolution / Struggle Samiti. Next to it, but not visible in the photo, is a place where Damini (pseudonym for the rape victim) is commemorated with flowers and fire rituals. - Picture information: Rally on group rape in Delhi 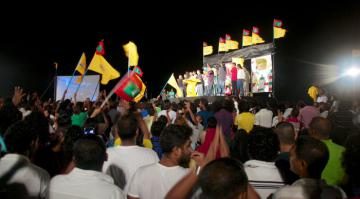 Description: Male, Maldives 2012. In February 2012, MDP supporters set up a permanent protest camp in one of the few public places in the capital, Male. Quite a few stopped working to hold an uninterrupted vigil. Especially in the evenings, large crowds gathered to hear politicians, artists and committed citizens express their displeasure on stage. This permanent meeting sometimes had the character of a festival, at which various bands played, artists exhibited their works and whole families stopped by. The photo from February 19, 2012 shows soldiers and police officers on stage who had quit their duties after the transfer of power. - Photo information: Protest camp in Male

Demonstration against undemocratic change of power 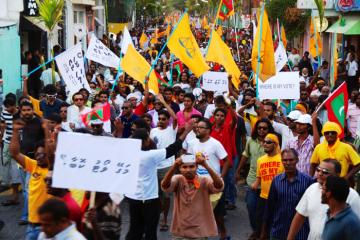 Description: Male, Maldives 2012. The exact number of participants in the protests is difficult to determine. What is certain is that on the evening of February 26th, 2012, more than 20,000 people took to the streets. In a city like Male, which has a population of around 100,000, that is an overwhelming order of magnitude. The protesters marching along the main shopping street here carried signs that read in both English and Dhivehi, the official language of the Maldives: "Where is my vote?" With this slogan, they showed that they saw the assumption of presidential duties by former Vice President Waheed and his new alliance of election losers from 2008 as undemocratic. - Image information: Demonstration against undemocratic change of power

Police violence against protesters in the Maldives 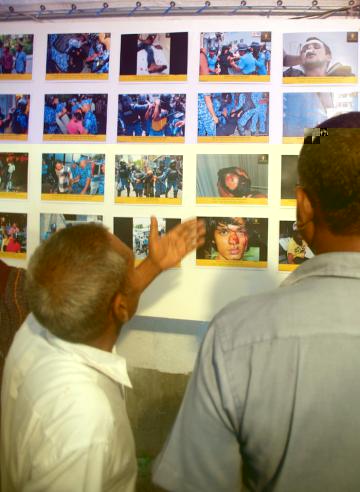 Description: Male, Maldives 2012. In August 2012, the Maldivian Democratic Party (MDP) exhibited a collection of photos. The pictures document the harshness with which the police acted against demonstrators on February 8, 2012. The reason for the demonstration was the resignation of the then incumbent President Mohamed Nasheed (MDP) after parts of the police and the military had revolted against him. The transfer of power was discussed controversially. In essence, the question was whether it was a coup or not. The now ruling coalition of former opposition parties, headed by President Mohammed Waheed Hassan Manik, was convinced of its legitimacy. But because Nasheed's supporters saw it differently, they initiated the largest and longest series of protests in Maldivian history to date. - Image information: Police violence against demonstrators in the Maldives 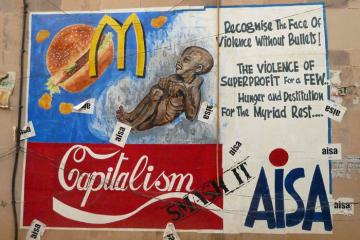 Description: Delhi, India 2013. "See the face of bullet-free violence! The violence of super profit for a few ... hunger and hardship for the countless rest ...". Anti-capitalist poster of the radical left student organization AISA (All India Students' Association) on the campus of Jawaharlal Nehru University in Delhi. AISA is the student wing of the Communist Party of India (Marxist-Leninist). (Text: Photo editing) - Image information: AISA's anti-capitalist poster