To each his own 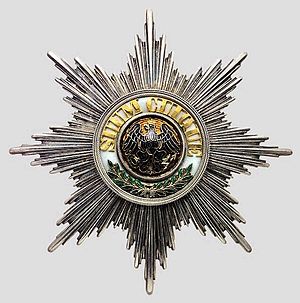 Star of the Order of the Black Eagle

Gate of the Buchenwald concentration camp, the imprisoned Bauhaus artist Franz Ehrlich designed the inscription in the Bauhaus style frowned upon by the Nazis.

To each his own, Latinsuum cuique, is one of the classic principles of law.

Suum cuique in the history

Suum cuique goes back as a principle to ancient Greece. In the Politeia, Plato stated that justice exists “when one does what is his own and not do many things” (τὸ τὰ αὑτοῦ πράττειν καὶ μὴ πολυπραγμονεῖν δικαιοσύνη ἐστί, to ta autou prattein kai me polypragmonein dikaiosyne esti, IV 433a). Everyone should do his own thing (for the community, for the state), in the manner and extent that corresponds to his nature, his possibilities and the individual circumstances. In addition, Plato declared that everyone should get his own and that his should not be taken from anyone (433e).

In the political and legal sense of "assigning everyone his own", the formula is used in Cicero, De legibus 1, 6 19, among others, which is based on the derivation of the Greek noun νόμος (nómos, Law) from the word νέμω (némo, assign) reminds: "Eamque rem (meant: legem) illi Graeco putant nomine a suum cuique tribuendo appellatam“-“ And this thing (the law) is, as they believe, named with its Greek name after 'to allocate to each his own' ”.

The expression is also found in Cicero, De officiis I, 15: in hominum societate tuenda tribuendoque suum cuique et rerum contractarum fide: ... to maintain the society of the people and to give everyone their own, as well as in the reliability of contractual agreements.

In the institutions of Emperor Justinian, at the very beginning, in the first part of the Corpus Iuris Civilis: iuris praecepta sunt haec: honeste vivere, alterum non laedere, suum cuique tribuere. - The precepts of the law are these: live honorably, hurt no one, grant each his own (Inst. 1, 1, 3). In Ulpian's Corpus Iuris Civilis, Digest 1, 1, 10, it says: Iustitia est constans et perpetua voluntas ius suum cuique tribuendi. - Justice is the constant and permanent will to give everyone their rights. This sentence was then placed at the beginning of the entire work by the author of the institutions, Tribonian, as a definition (Inst. 1, 1, 1).

Hugo Grotius also used the term in his property theory.

Use of the term today

Today's public discussion is whether “each one's own” is historically too burdened to be used impartially. The demand to preserve a worthy memory of the victims of National Socialism by renouncing thoughtless use and to show respect for the survivors is opposed to the view that "each his own" was mostly used in an honorable sense, for example to "work makes you free".

More recently, its use as a slogan in isolated advertising and political campaigns has led to protests, whereupon some of these advertising campaigns have been withdrawn.[1][2][3][4]