When will McDonalds sell its billionth hamburger? 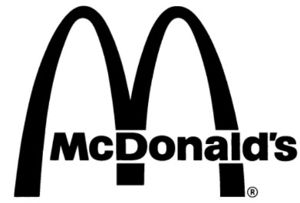 MC Donalds is the name of an American fast food restaurant that has been represented around the world since 1948.

After graduating from high school in 1926, McDonald brothers Maurice and Richard moved from New Hampshire to Hollywood. Here they were employed as set designers in a film studio until they were ready for something new in 1932 - they became self-employed. They started with a movie theater in Glendale, followed by a hot dog stand in Arcadia, but both were financially unsatisfactory and unsuccessful. In the 1930s, a whole new type of food came from Southern California, known nationwide as the "Car-Hop Drive-In". This form of eating was practiced on roller skates and invented by "wannabe stars" who were waiting to be "discovered" by producers.

The McDonald brothers headed this tidal wave when they opened a small drive-in restaurant in San Bernadino in 1937. The approximately 56m ² building had an octagonal shape, the roof went down to the control windows, which were provided with stools. The bar became a well-known contact point for young teenagers, especially males, who then liked to flirt with the waitresses, the "car hops" (young girls on roller skates, similar to hooter girls). The parking lot with its maximum capacity of 125 vehicles was fully occupied almost every weekend.

In 1948 the brothers realized that they were actually only feeding teenagers and that because of the masses of young people, families were staying away. So the brothers decided to change their concept and open a family-friendly restaurant without teenagers and “roller-skate girls”. In the fall of 1948 they closed their restaurant for 3 months to redesign the concept. They replaced their previous methods with technical processes that made work easier and cheaper. They used special machines and were the first to order the “multimixer” and help develop it, it could produce 5 milkshakes at once, and they turned their place into a more upscale restaurant with a smaller menu, good ingredients and low prices.

The drive-in bar was reopened in December 1948, this time with its own logo and a new concept and for the first time with the name of the brothers "McDonald's" in the name of the restaurant. The new concept was called "Speedee Service System"Which should indicate fast service, as a logo they used a little man with a hamburger head, who wore a chef's hat, he had the name"Chef Speedee“. 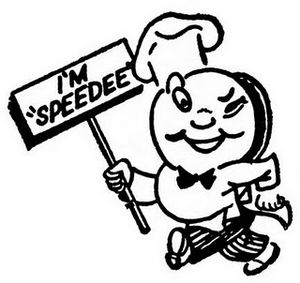 Among those already sold since 1937 Hamburgers were French fries and Milkshakes sold and it had been achieved that families flocked to the restaurant. Now the McDonald's brothers began to inspire their “little” customers, it became the predecessor of the Happy Meal initiated, with small give-aways and special promotions. In 1950 the brothers added another sentence to their neon sign Over 1 million pay!, in fact, McDonald's sold its millionth burger that year.

The idea for the franchise company came from an article in America Restaurant Magazine which was published in 1954. The McDonald's brothers were inundated with requests to tour their restaurant. They quickly discovered that people were keen to copy their ideas and the brothers immediately secured the patent rights to some of their articles. But the two brothers were not suitable for selling franchise contracts, they only managed to conclude 15 contracts. So it came about that the brothers hired a professional franchise agent - his name was Ray Kroc.

Ray Kroc was born in Illinois in 1902, he came from a family of musicians, he only played the piano a little himself. After high school, he made some money playing piano in smaller bars. He later had his own music shop and played in a dance group in the evenings. Later he combined the evening performances with the dance group, with the profession of sales representative. He ultimately specialized in his skills as a salesman. During World War I, Ray Kroc served as a paramedic driver by changing his date of birth. Here he met for the first time Walter Disneywho also served as an ambulance driver in France by falsifying his age. At that time, nobody knew that their two global companies would one day enter into a very close cooperation.

After World War II he worked for a company called the Lily Company, which specialized in the manufacture of machines, including the famous "multimixer". One of Ray Kroc's customers, Earl Prince, once drew his attention to the fact that 8 of these machines would be in continuous operation in San Bernadino. Infected by this information, Ray made his way to the small restaurant. It was in 1955 that the individual joined the franchise, Ray Kroc signed a contract with the McDonald's brothers that gave him all of the franchise rights to the restaurant. In 1960 the restaurant became what is now known as "McDonald's System Inc.". 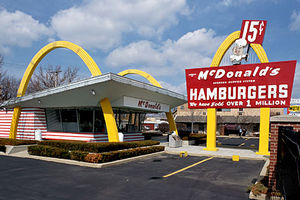 The McDonald's brothers got rich with their idea and in 1961 sold their rights to Ray Kroc for $ 2.7 million USD and retired.

In 1962 “Speedee” had to give its symbolic status to the two “Golden Arches”, the two parts of the letter “M” - the symbol that is known to this day. After a number of new McDonald restaurants were opened, the shape of the building was changed in 1968 and the seating was relocated to the interior. McDonald's became a global company with a market value of $ 25 million USD, and it was and is one of the most widely used brands in the world.

In 1961, Ray Kroc set up his own training facility for restaurant managers, the "Hamburger University". It serves to convey Ray Kroc's motto to the employees: "QSC" (Quality, Service and Cleanliness) Later there were over 3000 students per year and the Hamburg University became a million company. One in 15 workers in the United States had their first job at McDonald's.

McDonald's works with over 500 children's aid organizations and has also set up its own with the “Ronald McDonald House” foundation. The Ronald McDonald House is a medical facility for children with severe disabilities or illnesses that enables parents to be as close to their children as possible. In 1974 the first house opened in Philadelphia, on the 20th anniversary of the foundation in 1994, there were already 160 of these facilities around the world, with over 4,000 patients cared for around the clock.

McDonald's opens its first Disneyland restaurant in 1985 and Walt Disney World in 1987. With 4 activity books, McDonald's starts its cooperation with the Walt Disney Company and will produce several hundred Happy Meals with Disney characters by the end of 2006. The cooperation ended in 2007 and the exclusive marketing agreement was terminated by mutual agreement.[2]
Only in 2018 did both companies work together again, so there was Happy Meal including toys for the movie Chaos on the Net.[3]

You can find the series of the Happy Meals at: