What is the meaning of Salagrama

There are different types of Shilas (stones) that are highly worshiped in India. First of all, of course, is that Shaligram Shila, (also Shalagram, Salagram, Saligram), an incarnation of Vishnu himself.

In Brahma-Vaivarta Purana says Lord Mahavishnu: "I become a stone and will always live on the banks of the Gandaki rivers. The Millions of Worms (Vajra-Keeta) who live in this place, these stones with the sign of my chakra (discus)decorate.

In Gautamiya Tantra, it says that these venerable stones, known as Shalagram Shila, can only be found in the Gandaki River in Nepal. Brahma tells Narada that in particularly auspicious moments these Shilas (stones) are formed in the holy river Gandaki.

They have the colors black, red to brown, orange, green, yellow, white, blue, colored or transparent.

The Shalagram stones can only be found in or on the upper reaches of the Gandaki and its tributaries. (other names are Kali Gandaki, Krishna Gandaki, Narayani, Saligrami, Hiranyavati).

Lord Varaha says in the Varaha Purana to Boodevi (the goddess of planet earth): "O Devi, may all glory be with you. You asked me about a big secret. I will tell you an incident about it and the story connected with it. Lord Vishnu once meditated for the benefit of those in the Himalayas, the abode of the gods. While He was so absorbed in severe renunciation, much heat arose, which heated up all spheres. As the heat rose, sweat dripped from Lord Vishnus Gandaksthal (a point just below the ear). From this sweat flowed the all-sanctifying river Gandaki. This river is so sacred it can eradicate the sins of the entire world." 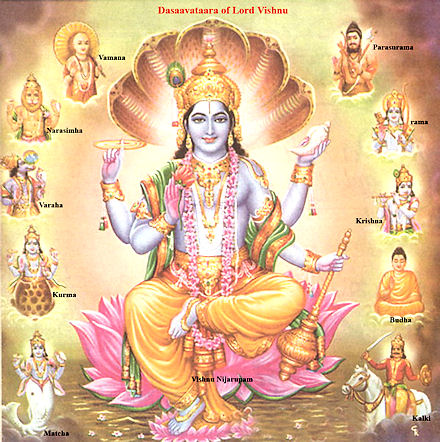 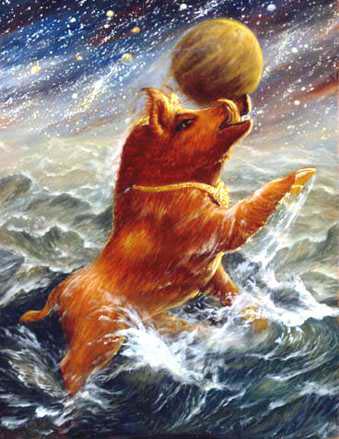 In the Brahma Vaivarta Purana tells how Vrinda Devi, a companion of Radharani, incarnated on earth as Tulasi Devi by Goloka Vrindavan (the highest spiritual planet) and Vishnu is cursed and also cursed by Him. These are transcendental games, always for the benefit of humanity.

The 'curse' of Vishnu is actually a supreme blessing, and it says that Tulasi Devi's body will become the famous Gandaki River, her hair will become the Tulasi plant and later she will marry Vishnu. This Tulasi plant will be the best of all flowers and trees and will be worshiped in all worlds. And Tulasi 'cursed' Vishnu, may he become a stone (Shaligram). 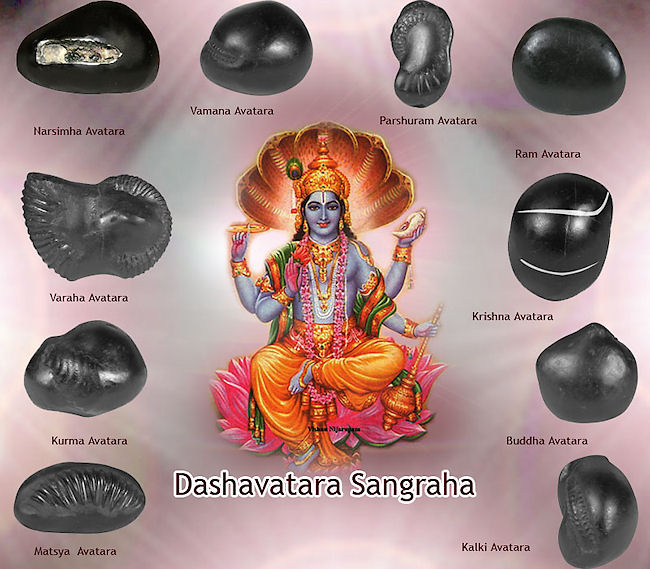 In Devi Bhagavatam there is also the story according to which Vishnu becomes stone (Shaligram) due to Vrindas (Tulasis), and also incarnates as grass (Kusha grass), as a tree (Pipal tree) and as a plant (Tulasi).

The Kusha grass (Eragrostis cynosuriodes, also Darbha grass) is hair that comes from the shell of the turtle incarnation Vishnu (Kurma Avatara). They were rubbed off the tank by a large whorl mountain and washed ashore by the milk ocean. This grass is used for religious rituals and knotted into mats, for meditation and ceremonies. 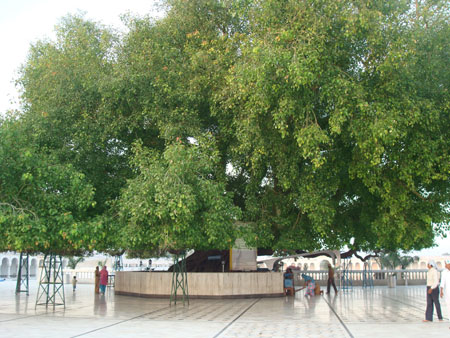 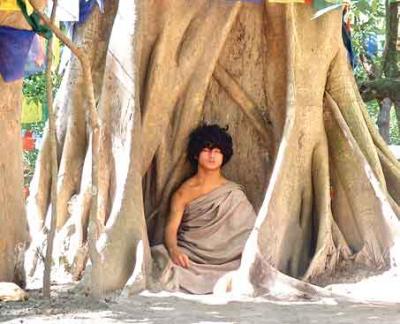 Tulasi (Ocimum sanctum, also holy basil) means “incomparable” in Sanskrit. The leaves and flowers are used especially for Shaligram worship, but also in every temple for Krishna and Vishnu worship. Prayer chains are carved from the wood of the plant. The Puranas report that this plant even grows on the spiritual planets. 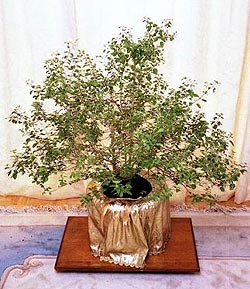 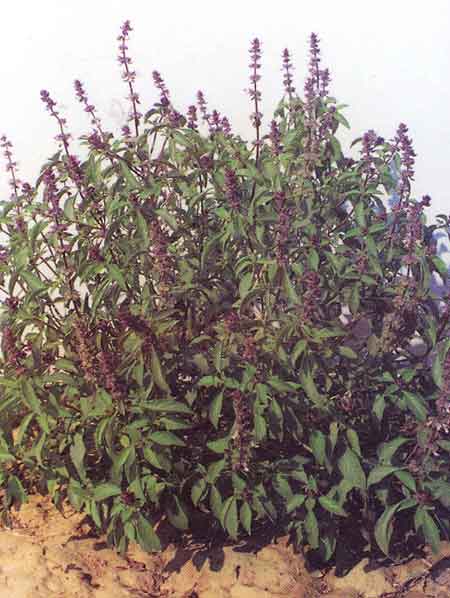 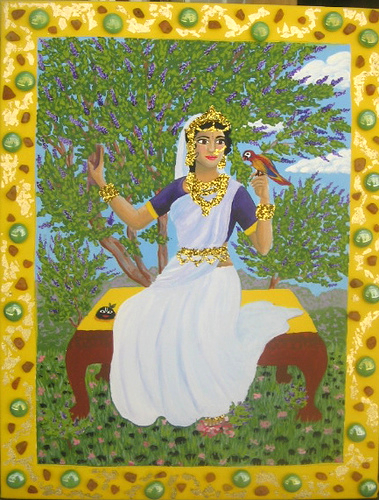 The Shalagram Shila is glorified in all Vedic scriptures.
Padma Purana: "Each person who drank the water with which Shalagram Shila was bathed is equivalent to the thousands and thousands of drinking panchagavya."

[panchagavya is a mixture of the 5 auspicious products of the cow: cow dung, cow urine, cow milk, cow ghee and cow yoghurt] 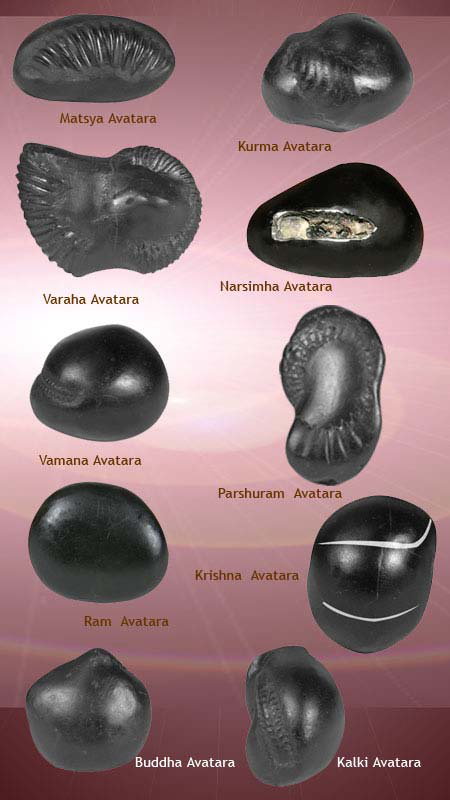 Skanda Purana: "The Lord resides in many places where He may be worshiped, but of all places Salagrama is the best."

Skanda Purana: "Worship of Salagram Sila can be done by women, shudras (low born), brahmanas, kshatriyas, etc., and they can all attain the eternal abode of Krishna perfectly."

Gautamiya Tantra: “Just by touching a shalagram one becomes free from the sins of millions of births, such a thing to say, if one worships him! Through Shalagrama puja (worship) one gets the company of Lord Hari (Vishnu). "

Padma Purana: "All these holy rivers that grant moksha (liberation), like Ganga, Godavari and others, reside in the caranamrita (bathing ritual water) of Shalagrama."

Salagram means -the place (village) where the Sal tree grows. In the Puranas it is mentioned that Salankayana Maharishi (among others) had his hermitage here, at the origin of the Gandaki, under a mighty, divine Sal tree, for meditation. The stone is called like this area.

Tulsi Devi received this blessing from Lord Vishnu, her body became the Gandaki River and Lord Vishnu resides (as Salagram) in her watery womb as her own "offspring". And innumerable Tulasi plants grow from her hair.

It is said that there is a corresponding shalagram form for each of the thousands of names of Vishnu. 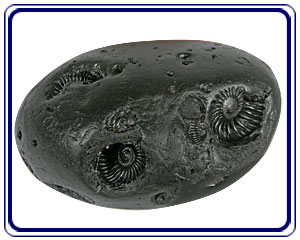 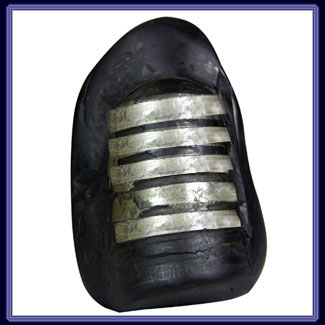 The imprints (chakras) in the Shalagrams are not of natural origin.
Lord Vishnu himself produces these disc markings in the form of these worms (Vajra-Keeta). In another Purana these (spiritual) worms are called the incarnation of Vishvakarma. Your teeth and nails are harder than granite. These vajra keeta dig into the stone and then live within. During their stay they create these chakras, inside and outside, and make other markings as well. Some Shilas have holes (one or more), these holes are called mouth (vadana). The salagram serves as a habitat for these 'worms' and not as a bowl.

The Puranas declare that through these chakras the Lord reveals His presence in the Shalagram.
Since He is already present by his own will, no installation ceremony or other dedication is required. The Shaligram can be immediately worshiped by anyone. There are of course some without any markings or prints. Different forms of salagram are associated with different avatars (incarnations) of Vishnu, as well as kurma, narasimha and so on. Each species is very, very sacred. The yellow and gold Shalagrams are considered to be extremely lucky and grant the admirer immense prosperity and wealth. But they are very rare and difficult to obtain. 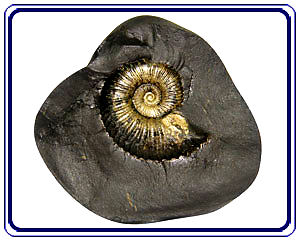 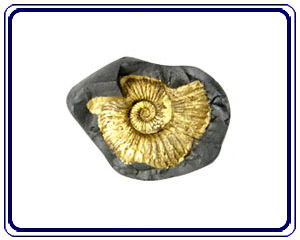 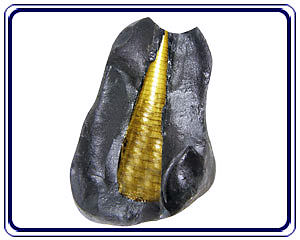 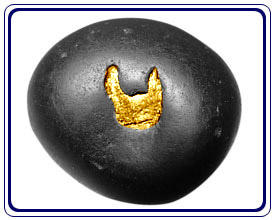 The Shalagram Shilas are classified into three groups according to Varaha Purana:

i) yes (Water-born) by contact with water and mountains they are very smooth and shiny, they are considered something special.

ii) sthalaja (Land-born) they are only in contact with mountains and therefore rough and not very shiny, they are considered "average".

iii) matha (Cell-born) these Shilas look like petrified ammonites (fossils), which are said to have been hollowed out by insects (kitaka), they are of lesser “value”.

There are two matha subgroups:
matha (actually): if the stones have been eaten hastily and listlessly, they say they are empty of juice, these shalagrams have rough chakras.
kesara: when they are slowly and carefully hollowed out by the insects, who also enjoy the sap that is present. The chakras (prints, traces) that the insects leave behind are highlighted by their many filaments (kesara).

The Shalagram can only be found in a certain region in Nepal and it is not so easy and quick to get there. But the demand is very strong all over India, in every temple and household one wants to worship Shalagram. Therefore, you only get duplicates at many pilgrimage markets. Either from the Triveni river on the Nepal / India border, these look a bit similar to the real shalagrams, but are much lighter and their chakras are more unsightly and they do not shine. Or you can use tools to carve such imprints into stones of some kind. Outside of Nepal you can hardly get real Shaligrams. You can test them with gold rings, gold chains or gold coins. A clearly visible trace remains immediately on the surface. Goldsmiths in India have been using Shalagram stones since ancient times to determine the purity of gold.

But of course there are a lot of duplicates in India. Shalagrams are heavier and stronger and shinier than e.g. the false Shilas from Triveni, a river on the Nepal / India border.

The Skanda Purana says: "Someone who puts a price on a Shalagram Shila, sells a Shalagram, gives his opinion about the value, appraises it to estimate the sales value, all these people will live in a hell until the time of cosmic destruction. "

Nevertheless there is a market for pilgrims and devotees everywhere in India and very rare Shalagrams can even be obtained on the Internet for a large "donation".

Outside of Nepal you can often find it fake shalagramsmade with tools from normal stones.

Shalagram Kshetra is the name of the area from Muktinath to Damodar Kund. Shalagram Shilas are rarely found in Muktinath. From around Kagbeni, Shaligram occurs in (or on) the upper reaches of the Gandaki and its tributaries. In Kagbeni, the black Kali (Krishna) river, coming from Muktinath, flows into the brown Gandaki, coming from Damodar Kund, and henceforth becomes Kaligandaki (Krishnagandaki). This confluence is also called the Hamsatirtha.

In the Puranas, Kagbeni is called Yakshya-Tirtha. Nalakuvera and Manigriva, the two sons of the demigod Kuvera (also called Yakshya) came through here on their pilgrimage to Damodar-Kund.

Kakabhushundi (the wise man in the body of a crow) and the four Kumaras have practiced renunciation here.

Damodar Kund and Shalagram Mountains are the "birthplace" of Shalagram and here you can easily find Shalagrams at every step. The actual source of the Kaligandaki is 108-Kund. Sometimes you find very large shalagrams, 1-2 meters high, which are then transported away by a group of men with technical aids.