Ford was the first car company

Henry Ford (1863-1947) built his first car in 1896 in a shed behind his parents' house. After completing a few more automobiles, he was entrusted with running their factory by the founders of the Detroit Automobile Company (the first automobile company in Detroit). But after just 20 cars had been built, the company went bankrupt in January 1901. In November 1901, Henry Ford founded the Henry Ford Company. Here, too, he only lasted a few months - the company was renamed the Cadillac Automobile Company in 1902 and sold to General Motors in 1909. In 1903 Ford founded the Ford Motor Company with eleven partners; The Dodge brothers, who later started their own car company, were among the financiers. The factory was on Detroit's Mack Avenue. The first car, the Model A (Fordmobile), came onto the market in the year it was founded. Based on this vehicle, the first delivery van from Ford was built in 1904. The next trucks, mostly 1.5-ton trucks, were descendants of the passenger car series. In 1910, Ford opened a new factory in Highland Park near Detroit.

MODEL T: The resounding success came in 1908 with the Model T (Tin Lizzie), which was produced from 1913 using the then revolutionary assembly line technology that Ford had copied from the Chicago slaughterhouses. This spartan people's car, which was only available with black paintwork, was built by Ford until it was hopelessly obsolete in 1927. A total of over 15 million vehicles of this type were produced. Ford's success was largely due to the low prices that made it possible for almost every reasonably frugal American to buy a car. Until then, cars had been a luxury item for bored millionaires. With the Ford T, however, the motorization of America began. As a thank you, Henry Ford is still glorified today like hardly any other American industrialist. A larger-than-life monument was built for him in Detroit, and his memoirs are considered "holy scriptures" for every young entrepreneur. 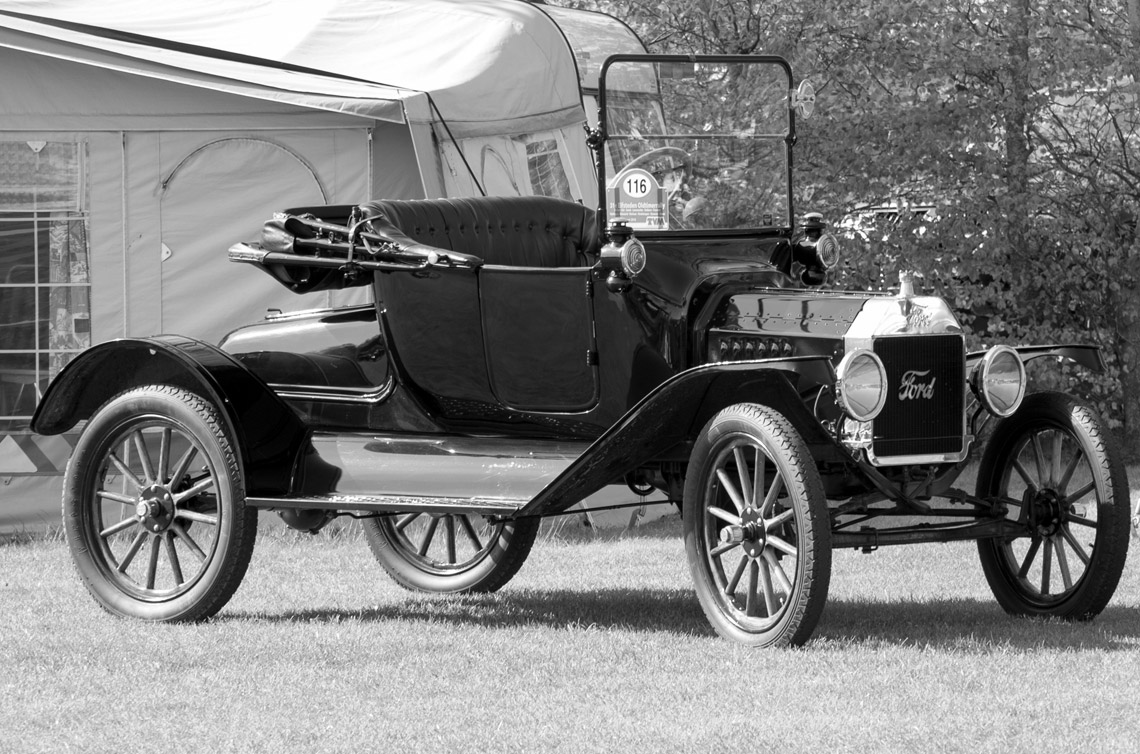 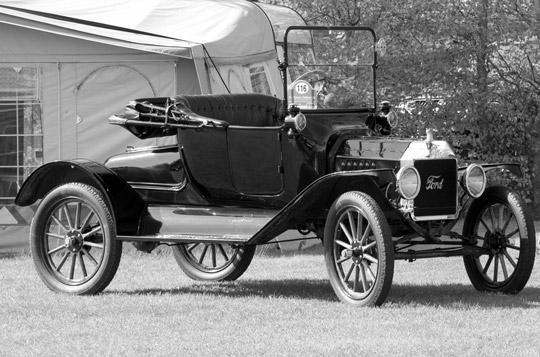 FORDSON: In 1917 Ford founded its own company for the production of tractors, the Henry Ford and Son Corporation (Fordson), the "Son" standing for his son Edsel. The first Fordson tractors rolled off the production line at the end of the year. In 1920 Ford & Son was reintegrated into the parent company, but the tractors kept the Fordson name until 1964. Ford became one of the world's largest tractor manufacturers over the next few decades. In 1986 Ford took over the US agricultural machinery manufacturer New Holland, but sold its entire tractor and agricultural machinery business to the Fiat Group in 1991, which initially operated the company in N.H. Geotech and renamed New Holland again in 1993. In 1999, New Holland finally merged with the US construction machinery manufacturer Case, which resulted in the Fiat subsidiary CNH Global (Case, New Holland). 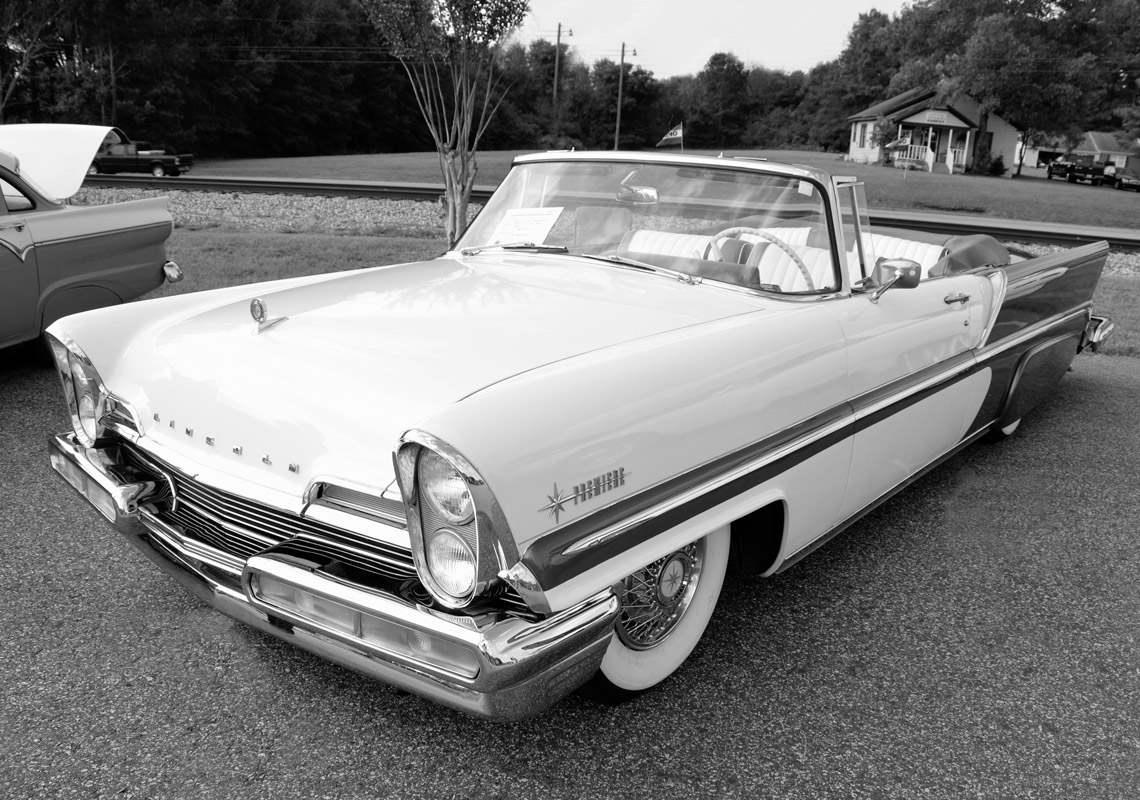 LINCOLN: In 1922 Ford acquired the Lincoln Motor Company, which had been founded only five years earlier by former Cadillac owner Henry Martyn Leland (1843-1932), which enabled him to offer larger, more luxurious automobiles that were aimed at the same group of buyers like General Motors' Cadillacs. One of the most beautiful Lincoln was the Continental (1939), the body of which Eugéne Grégoire had designed. Thanks to its distinctive shape, the New York Museum of Modern Art added a copy to its permanent collection in 1951. The brand gained notoriety in November 1963 when then US President John F. Kennedy was shot in an open Lincoln Continental.

MERCURY: The Mercury brand (named after the messenger of the gods Mercury - the Roman variant of the Greek Hermes) was introduced for the mid-range market in 1938. Many Mercury models differed from the Ford models only in marginal details such as grill, equipment and company logo. Ford itself continued to build mainly inexpensive people's cars that were in direct competition with GM's Chevrolet brand. In addition, Ford brought out some sports car classics such as the Thunderbird (from 1955), the Mustang (from 1964) and the GT40 (from 1965), which won the Le Mans 24-hour race four times (1965-1968).

F-SERIES, TRANSIT: From the end of the 1940s there were also larger 2- and 3-ton trucks in various designs. The most successful were the Ford F pickup (from 1948) and the Ford Transit transporter, which was first launched in 1961. The vehicles of the F-series, which consists of various pickups and chassis cabs for light trucks, have been among the best-selling cars in North America for decades, making them the main sales driver of the Ford Group. In 1997, Ford sold the medium and heavy truck business to the Daimler subsidiary Freightliner, which it then renamed Sterling Truck.

THUNDERBIRD, MUSTANG: Based on the Chevrolet Corvette from General Motors, Ford launched the two-seater sports coupé Thunderbird in 1964. The early models from 1955 to 1957 in particular are among the most beautiful vehicles in automotive history. The Thunderbird models were built until 1997 and then again from 2002 to 2005. With the Mustang (from 1964), Ford founded the pony car class (compact sports coupés and convertibles) - well-known examples were AMC Javelin, Chevrolet Camaro, Dodge Challenger, Mercury Cougar, Plymouth Barracuda and Pontiac Firebird. However, the Mustang was far more successful than other pony cars. In the first model year, Ford was able to sell 680,000 vehicles; to date, no other model has managed this in the USA.

COSWORTH: The English designers Mike Costin and Keith Duckworth (both founded the Cosworth company in 1959), who developed extremely successful racing engines for Ford, caused a sensation from 1967 onwards. Racing teams such as Benetton, Brabham, Lotus, March, Matra, McLaren, Tyrrell and Williams were able to achieve numerous victories and 13 Formula 1 world titles with these engines from 1968 to 1994: 1968 Lotus-Ford (Graham Hill), 1969 Matra- Ford (Jackie Stewart), 1970 Lotus-Ford (Jochen Rindt), 1971 Tyrrell-Ford (Jackie Stewart), 1972 Lotus-Ford (Emerson Fittipaldi), 1973 Tyrrell-Ford (Jackie Stewart), 1974 McLaren-Ford (Emerson Fittipaldi) , 1976 McLaren-Ford (James Hunt), 1978 Lotus-Ford (Mario Andretti), 1980 Williams-Ford (Alan Jones), 1981 Brabham-Ford (Nelson Piquet), 1982 Williams-Ford (Keke Rosberg) and 1994 Benetton-Ford (Michael sSchumacher). After several changes of ownership, Audi took over the engine division of Cosworth (Cosworth Technology) and Ford took over the racing division (Cosworth Racing) in 1998. In 1999, Ford reactivated its F1 racing department with the purchase of the Stewart Grand Prix team, which three-time F1 world champion Jackie Stewart founded with his son Paul in 1996. Since the new racing team, which went by the name of Jaguar Racing (after the Ford subsidiary Jaguar Cars), could not achieve any notable success, Ford sold it to Red Bull Racing in 2004, while Cosworth Racing from Kevin Kalkhoven and Gerald Forsythe, both of whom had long been known as Racing team owners involved in US motorsport was taken over. Cosworth Technology (now Mahle Powertrain) has been part of the Mahle Group since 2004.

DE TOMASO, GHIA, VIGNALE: In 1970 Ford took an 80 percent stake in the Italian group of companies De Tomaso / Ghia / Vignale. The Argentine racing driver Alejandro De Tomaso (1928 - 2003) founded the sports car company in Modena in 1959. After the less successful Vallelunga (1965-1967) and Mangusta (1967-1971) models, the breakthrough came in 1971 with the Pantera, which the Finnish designer Tom Tjaarda had designed by the Italian bodywork manufacturer Ghia. The company founded by Giacinto Ghia (1887-1944) in Turin in 1923, where cars such as the Fiat Balilla (1933), the VW-Karmann-Ghia (1955), the Lincoln Futura (1955) or the Volvo P1800 (1957) were styled was owned by De Tomaso since 1968 and this is where the first Panteras were built. However, production was soon relocated to the larger Vignale plant in Turin, which had also belonged to De Tomaso since 1969. Carozzeria Alfredo Vignale, which mainly works for Italian car manufacturers such as Alfa Romeo, Ferrari, Fiat, Lancia and Maserati, was founded in Turin in 1946 by Alfredo Vignale (1913-1969). In 1974, however, Ford had to stop selling the Pantera due to strict American environmental and safety regulations, which the sports car by no means met. Alejandro De Tomaso then bought back the manufacturing rights for the Pantera from Ford. From 1973 Ford sold the high-quality equipped models under the Ghia label.