Who designed the habit of the nuns

"... The second request: You would like to set up a rule and send it to us in writing, which is in accordance with the nature of the female sex and describes the establishment and organization of our religious life from the ground up: For we have convinced ourselves that this is not yet from the holy fathers has been carried out ... But those who set up the rules of the monastery have not only been completely silent about women, but they have also made provisions that they must have known that they are by no means suitable for women ... You, Lord, fall the task, as long as you are still alive, to give us a rule that we shall keep for all time. After all, you are next to God the founder of this sanctuary, you were the creator of our community through God, you should now with God be the lawgiver of our order ... speak to us and we will hear you "

"... I shall set up and send you a certain rule as a rule for your order, so that you have something that you ought to obey even more securely in what is written than in the mere coming of it. So I have resolved to follow, in part, well-established customs , partly to base the testimonies of Holy Scripture and the pillars of reason and to form a whole from them ... For this purpose I want to put together a rule for you from the numerous writings of the holy fathers and from the most established monastery customs. what comes to mind, I want to take the best and, as it were, collect in a bundle everything that I see in accordance with your sacred calling, and not only what has been determined about nuns, but also what has been determined about monks .. I have decided to set out the scriptures that I want to write for your instruction and in which I will describe and firmly define your pious status, as well as the celebration of the divine service First, I will divide it into three sections, which, I believe, contain the main thing for monastic life: one should live celibate and without possessions, study mostly in silence; that is, according to the prescription given by the Lord in the Gospel: girdle your loins, renounce everything, avoid idle words ... "

By providing a reasonably effective cure for this plague, let us at least keep our tongues in check and observe complete silence in the following places and at the following times: at worship, in the monastery, in the dormitory, in the refectory, while eating, in the kitchen and especially after Compline. If it is necessary, we want to use signs instead of the words in the places mentioned and at the prescribed times ... For from this source arise slander, controversy, vilification, yes sometimes gatherings and conspiracies, which shake the building of religion, yes over throw the pile.

When choosing the location for a monastery, as far as this can be done, the advice of St. Benedict should be followed: Within the monastic district, everything that is absolutely necessary for a monastery should be decided: namely garden, well, mill, Bakery with an oven and space where the sisters can do their daily business so that there is no reason to wander outside. The buildings clearly show whether they are larger or more beautiful than their purpose requires, or whether we, adorning them with works of sculpture and painting, build royal palaces instead of huts of poverty ... That is why we must ensure that that we set a certain limit for our house and our property and that we do not desire anything that is not necessary, accept it when it is offered, or retain it when it has been taken over.Because everything that goes beyond the actual need we only possess like a robbery and are guilty of the deaths of as many poor as we could have received with our abundance. So every year after the fruits have been harvested, the need for the year must be estimated; what is left should be given to the poor, or rather given back. The decoration of the house of God should contain the necessary, not the superfluous, be more clean than precious. Nothing in it should be made of gold or silver, save a silver chalice or several if necessary. Embellishments made of silk should only be attached to the stoles and armbands. No sculptures should be in the house of God. Only a wooden cross should be erected on the altar, on which - nothing should prevent it - the image of the Savior can be painted if one wants. But other sculptures should remain alien to the altars. The monastery should be satisfied with two bells. A vessel with holy water is to be placed outside the entrance to the oratory so that those who enter early and those who go out after the service can consecrate themselves with it. None of the nuns should be absent from the hearing; rather: as soon as the bell is given, they should put everything else aside and hurry to the service, but in a modest way. No other book may be tolerated in the choir than that which is currently necessary for the respective worship service ... The psalms should be spoken loudly and clearly, the psalmody or the singing should be so moderate that even those who have a weak voice, can arise. In the church nothing should be read or sung that is not taken from the Holy Scriptures themselves, i.e. from the New or Old Testament, both of which are to be divided into reading sections so that they are read out once every year in the church. Treatises or sermons by the Doctors of the Church or other edifying writings are read out at the table or in the chapter; but reading should also be permitted to everyone else wherever it is necessary. But no sister should allow herself to read or sing something that she has not taken notice of beforehand. If someone in the oratory brings something unsuitable to the meeting, ask for forgiveness in the presence of all the sisters ... 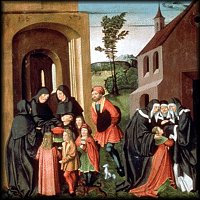 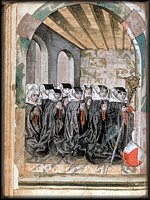 At midnight, according to the prophet's instructions, one rises to the nocturnal vigils. It is therefore necessary to go to sleep so early that the tender nature can endure these night vigils and the day's work can begin at sunrise, as St. Benedict prescribes. After the vigils one should go to rest again until the sign to Matutin sounds. Sleep should not be denied to the tender nature during the rest of the night. Because sleep above all refreshes the tired body, makes it fit for work again and keeps it sober and alert. But whoever needs meditation on the Psalms or any lessons, as St. Benedict also mentions, should do so in such a way that he does not disturb the rest in their sleep ...

Matins should be celebrated at the first light of day, and the sign for it should sound at sunrise itself, when it can be seen. When it is done, return to the dormitory. In summer, when the night is short and the morning long, we do not forbid the sisters to get some sleep before the prim until the signal sounds and they are awakened ...This morning rest should therefore be permitted from Easter to the autumn equinox, from where the night begins to overtake the day.

After leaving the dormitory, the sisters should wash themselves, take their books and sit in the cloister, reading or singing, until the first bell rings. After the prim one goes to the chapter house; there everyone sits down, and after the date has been announced, a passage from the story of the martyrs is read aloud. This can be followed by an edifying discussion or a section of the rule read out and explained. Finally, things should be dealt with here, something that should be criticized or rearranged.

When the sisters have left the chapter house, they should carry out the prescribed work and be occupied with reading or singing or with manual labor up to the third.

After the third, mass should be read, for which a monk priest is assigned to the weekly service. If there are enough people, he should bring a deacon and sub-deacon with him to administer him or to exercise his office himself. Their entry and exit should take place in such a way that they do not meet with the sisters. If several are necessary, care must be taken to ensure that, if it is possible, the monks are never withdrawn from their own convent during worship because of the masses in the nunnery.

Even after mass, the sisters should return to work up to the sext; In general, they should never be idle, but each should work what they can and must.

After the sixth one should go to dinner, unless it is a fast day. In this case one should wait until the ninth before eating, in the great Lent until Vespers. At no time should reading be omitted in the Convention. If the abbess wants to stop, she say: It is enough. And immediately everyone should rise to prayers of thanks.

In summer one should rest in the dormitory after dinner until the ninth, and go back to work after the ninth until Vespers. Immediately after Vespers, supper or fasting is eaten, depending on the time. On Saturdays, before the evening snack, there is a cleaning, consisting of washing the feet and hands. In doing this, the abbess should work in association with the sisters who do the weekly duty in the kitchen.

After supper you go straight to Compline; then go to rest.