How safe is Venezuela now

Life in Caracas: "After 6 p.m. nobody dares to go out on the streets"

Life in the metropolises of Latin America has never been like in Europe. Mexico City, São Paulo, Medellín and Co. have long been notorious for their crime. Gerhard R. * knows that because he has traveled a lot in the region. The logistics company he runs has offices in most of the major countries in the hemisphere. He travels there several times a year. "Robberies, burglaries, express kidnappings - they are practically everywhere in Latin America," he says. "But in Caracas it's extreme."

The assessment is very subjective, but at least one statistic proves him right: Caracas has been one of the most violent cities in the world for years, in 2015 it had the highest murder rate in the world with 120 murders per 100,000 inhabitants - almost four times as many as in Baghdad and 20 percent more than three years earlier.

It doesn't look much better in other areas of the country either. But Gerhard R. is not interested in statistics, but in the worries and needs of his employees who hold their positions in Caracas. You are Venezuelan and know how to deal with the situation: You always tell someone where you are or when you are late so that nobody is worried - or can call for help if the worst comes to the worst. Certain areas are avoided, and those who can afford it live in guarded residential areas or apartment buildings. "But even there," says R., "nobody dares to go out on the street after 6 p.m."

In addition to violence, hunger has meanwhile also come for the better-off. Those who do not have access to foreign currencies can only buy the bare essentials on the black market. There is hardly anything anywhere else anyway.

R. was last in Caracas at the beginning of 2017. He immediately noticed how much all five employees and the branch manager had lost weight. "I had read about the Maduro diet, now I saw it in front of me," he says. "Maduro Diet" is the sarcastic name for the country's food shortages. In a survey conducted by three universities, participants were asked to report their weight loss in the 2016 calendar year. The result: an average of 8.7 kilograms.

The visit to Caracas was a detour from a business trip to Colombia for R. - to "provide moral support for the employees," he says. There isn't too much business there at the moment anyway - at least not one that would require his presence: "We hope that things will pick up again at some point and that we will be able to get started as one of the few remaining companies."

No improvement in sight

At the moment, nobody really knows where to attach this hope: The government seems to be firmly in the saddle despite ongoing protests. The strong majority of the opposition in the National Assembly is almost worthless because after 18 years of rule by the PSUV, parliament has hardly any powers left.

Whether Venezuela will elect a new president in 2019 is also in the stars, because the government seems ready to do anything to stay in power. As a precaution, she has already banned the consensus candidate of the fragmented opposition, Henrique Capriles, from political office for 15 years. For the time being, Capriles seems to remain governor of the state of Miranda, but a third presidential candidacy (after 2012 and 2013) would be ruled out.

There are various explanations for the fact that the Venezuelans have put up with this situation for so long: On the political side, the disagreement between the other parties is cited. The "Caribbean serenity" is cited as a social component, at least of the Venezuelans who live near the coast. But the government's repression and anti-imperialist propaganda are also mentioned as factors - although there is no consensus on any of the points.

You have to come to terms with all of this if you want to live in Venezuela. Germans do that too, because the country also has its charming sides: Caribbean beaches, rainforest and Andes form a varied landscape, plus a pleasant climate. Many appreciate the lovable openness of the people.

That was not enough for Steffen G. * in the long run. He lived in Caracas for eight years and made a career in a German company. He married a Venezuelan woman and started a family with her. In 2013 they had had enough of the crime: "In the past you could still move around quite freely if you followed a few rules of thumb. But at some point no wall seemed high enough to stop burglars", G. describes his perception.

With the economic decline and the supply crisis, the willingness to use violence has risen massively, he says: "Most of those who do something like this have no other choice of paying for food or medicine." In addition, the police do not do the slightest thing: "Presumably they earn money, or at least don't want to risk anything."

No trust in institutions

"Plata o plomo", "silver or lead" or "money or bullet", that is the slogan with which criminal gangs confront overly diligent officials all over Latin America. But in Venezuela, trust in the law enforcement officers is zero, says entrepreneur Gerhard R .: "In Brazil you can report a crime to the police, in Venezuela not." 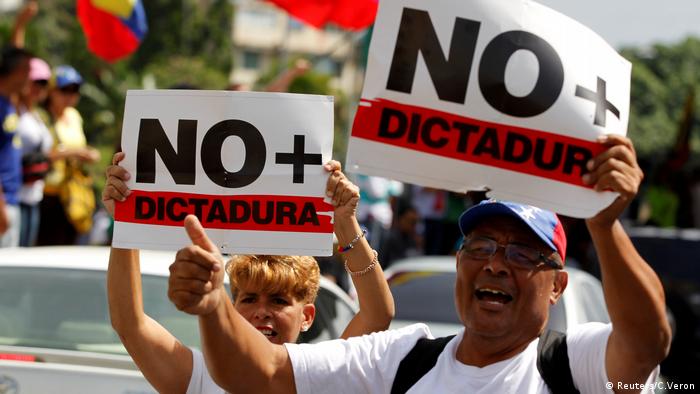 Fear of the one-party state drives many out of Venezuela

In general, he perceives an atmosphere of mistrust in Caracas that he does not know from any other country: "There are hardly any taxis there because nobody uses them - for fear of getting into a kidnapper's car." He's now staying with colleagues to avoid going to the hotel after dinner. And on the plane he only travels to Venezuela with hand luggage so that nobody can put him in the checked suitcase.

For the same reason, he says, there are hardly any private logistics companies that organize exports from Venezuela: the risk that customs officers hide drugs in the cargo in state-controlled ports is too great. International law enforcement agencies have been investigating the urgent suspicion that parts of the government are using the state-controlled ports to ship drugs from the Andes to the world.

The exodus has long since begun

Steffen G. and his family are not alone with their emigration. Many foreigners have left Venezuela in the past few years. There are hardly any new ones. Many international companies have ceased their business activities or only exist as a legal shell.

But Venezuelans are also leaving their country. Some sources give the number 150,000 for 2016. In the past, it was mainly wealthy and educated Venezuelans who went - for example to the USA, where their number doubled to around 180,000 between 2000 and 2012. In the meantime, people without special qualifications are also looking for happiness abroad.

This poses additional problems for the Venezuelan economy, because it is mainly young people who see an opportunity to work abroad: "Some companies have their Venezuelan employees in branches in Chile or Colombia," says Gerhard R. Time they could go back and start business again. But the longer it takes, the less people will want to leave their new existence, he fears and adds resignedly: "One can only hope that something will happen soon."

* The names are fictitious to protect the sources.