What is good self-punishment

Self-punishment - What is it? How do I handle this? Self-punishment is a method of punishing yourself for alleged or real mistakes and offenses of your own. There is self-punishment in a psychological and religious context. In many religions it was common for people to punish themselves for failing to obey religious commandments, resolutions, or discipline. Forms of self-punishment were, for example, fasting, wearing hair robes, thorn belts, sleep deprivation, more intensive spiritual practices or repentant confession of offenses in front of a group.

Self-punishment as an obsolete concept?

In the meantime, the concept of self-punishment has become somewhat out of fashion in spiritual movements. In psychology, the concept of self-punishment exists in many ways. Destructive behavior, including pain, is interpreted as self-punishment. E.g. in psychoanalysis there is the concept of self-punishment, in which one suffers physical illnesses oneself because one does not sacrifice oneself for another. For example, if you didn't want to look after your father, you can subconsciously punish yourself with paralysis and pain. Self-punishment can also be the form of autoaggression: inflicting pain, injuring yourself, in order to atone for a guilt. This can be done consciously or unconsciously. It is discussed in psychotherapy whether anorexia, anorexia, sometimes also has something to do with self-punishment. Self-punishment can also be behind it when people who have a negative father image, whenever they have had a great success, a career advancement, do something to destroy the success. Anyone who has a negative father image has a guilty conscience for it. This ensures that you cannot be more successful than your father. By punishing yourself for success, you atone for it.

Dealing with self-punishment from others

From a lecture by Sukadev Bretz

There are people who are not very kind to themselves. There are people who are more friendly with others than with themselves. How do you deal with that? There are several forms of self-punishment. There are morbid forms of self-punishment; one should try to lead these people into psychotherapy. One can advise people, "I think you have a mental difficulty / problem / disorder." Then you can say to people: "I think you should take part in psychotherapy."

Then there are people who punish themselves more subtly. You could point this out to these people. For example, I have often seen people who have a weak father image, whenever they are successful, throw away the success. For example, some people have a father who was unsuccessful, maybe he was addicted to alcohol, maybe he had a different addiction, maybe he had a life where he kept getting into trouble. Maybe her father scolded her over and over again. Maybe they have a very bad father image. They are now trying to do better than the father, and whenever they have achieved career advancement they throw everything away. They punish themselves for being more successful than the father. You can tell people that, maybe you can help them deal with it in psychotherapy or a family constellation. Perhaps people can learn to get along with their father internally, to change their father's image and ultimately to know that their father doesn't even want them to punish themselves.

There are also other forms of self-punishment that used to be common in spiritual and religious circles, that is, if you do not do your yoga exercises in the morning, then there is no breakfast either, as an example. And if someone has done something during the day that he shouldn't have done, he sleeps on the floor. So there are such forms of self-punishment that are rather out of fashion in spiritual and religious circles these days, but they don't have to be wrong. You don't have to express your belief that this is not appropriate.

There are of course forms of self-punishment that one shouldn't do, so one shouldn't torture one's body in the name of spirituality and religiosity. From the yoga point of view, scourging, whipping, scoring or thorn belts etc. are considered tamassig, so something that should not be done. But you can take on something, you can say you want to work on yourself and if you haven't done that, you can draw certain conclusions. You don't have to call that self-punishment. If people harmlessly self-punish themselves in order to work on themselves a little more, that's okay. Just self-punishment shouldn't result in causing yourself any physical pain or doing anything that's unhealthy.

If you feel bad sometimes, you are in a depressed phase, you can also consider whether this bad-going is perhaps also a form of self-punishment. Maybe you did something that you regret in hindsight and maybe you find that you should have done something else. It could be that your bad mood, your depressed state of mind is a kind of self-punishment. It could be a possibility. Of course, most depression has nothing to do with it.

It's not uncommon to find this and you can practice self-punishment for something you actually did, maybe you treated someone shabbily, reached the position you reached by unethical trickery of someone else. In these cases, of course, it is good to redress the wrong. If possible to this person or donations to a non-profit organization or by saying that I have now acquired this post with unlawful means, I will now give it up again. Better than getting into a real depression.

But there is also self-punishment for not failing on your own. I have not seen it seldom that people with a weak father image punish themselves for their own success somewhere. I know some people who were very smart, skillful, dedicated, and energetic. But they had a father who was either an alcoholic or who hadn't looked after the family somewhere. Anyway, which wasn't very successful. Whenever the child, and in one case a man and another time a woman, was suddenly very successful through commitment, energy, intelligence and through skillful action, was just about to breakthrough or had achieved the breakthrough, suddenly fell into depression and gave up everything. This is also called self-sabotage. There it was obvious to me that this was a kind of self-punishment.

Think about whether this can be something that is interesting for you, that could be helpful for you.

Self-punishment in relation to other personality traits

Self-punishment belongs to the group of personality traits, downsides, vices and virtues. To better understand this character trait, let's relate it to others: 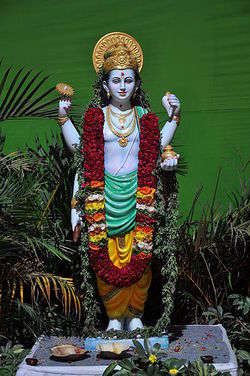 The god Dhanvantari is responsible for healing. Ayurvedis pray to him.

Synonyms that are commonly interpreted as negative are, for example

Antonyms, i.e. opposites, to a vice, a shadowy side, a negative personality trait, are commonly interpreted as an opposite pole. These can be cultivated in order to overcome the vice, the dark side. So here are some opposing poles to self-punishment that have a positive connotation:

The opposite of a shadowy side, a vice, is not always positive. Here are a few examples of antonyms about self-punishment that are not seen as beneficial:

Properties in the alphabet before or after

Here are some traits that come before or after self-punishment in the alphabet:

Self-punishment can be counted under the following two groups of characteristics:

Seminars on dealing with burnout:

July 9th, 2021 - July 11th, 2021 - Being mindful in the here and now
With mindfulness you bring body and mind together and are fully present in the present moment. Every moment is a precious gift. Every breath, every step brings you to ...
September 5th, 2021 - September 10th, 2021 - Burnout and anti-stress counselor in training
Learn to guide groups or individuals in coping with stress. Protect yourself and others from the stress trap or take necessary countermeasures. With the theoretical part and techn ...

More information on yoga and meditation